The cheapest Nintendo Switch bundles, deals and prices in June 2020

Nintendo Switch deals had an extended return last week, as retailers in both the US and UK posted plenty of offers with a seemingly larger inventory than we've previously seen up for grabs. These bundles lasted well into the weekend as well, before dropping out in the US at the start of the week. That means you might have missed out on the latest Nintendo Switch bundles, but never fear. The fact that there was enough consoles available to satisfy demand for that long suggests the Nintendo Switch is back in business, so stay in touch because we'll be bringing you all the latest stock as it comes in.

Note: There is currently no Nintendo Switch stock available in the US

Those Nintendo Switch deals marked what we hope is a plentiful return to the shelves, and with such widespread stock on offer there's no telling how much inventory we have to play with.We don't know when Nintendo Switch deals will return fully, but until then, we're also taking a look at the best retailers to check when those console do land on the shelves again.

The Nintendo Switch has been out of stock since March, which means last week was the first chance many have had to pick up their own consoles. Since then we've also had Animal Crossing hit the (digital) shelves, pushing that demand even higher. 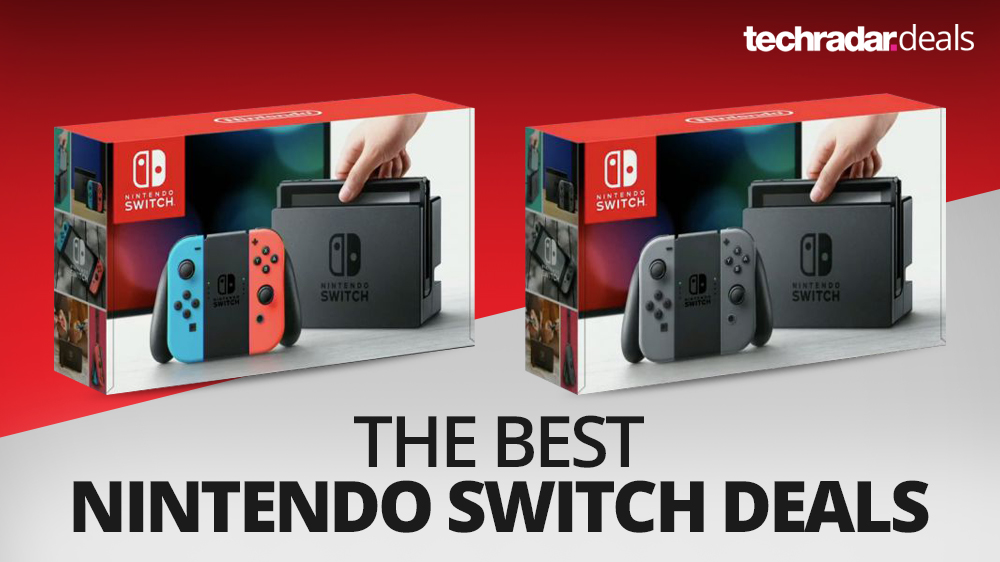 We're listing all of the best Nintendo Switch deals right here and we're always on the lookout for the best bundles with extra games, controllers and other accessories so we can share them with you while they're hot. Scroll past the bundles on this page and we'll show you prices on extra Joy-Con and Pro controllers and Nintendo Switch memory cards too. If you want to play online multiplayer and get other benefits like free games you'll want to pick up a Nintendo Switch Online subscription deal. We also have a dedicated page of Nintendo Switch prices for our Australian readers.

On its own, the MSRP/RRP Nintendo Switch price is $299 in the USA and £279 in the UK. At the moment you may be tempted to pay a premium to get your hands on such an in-demand console, but with all signs pointing to an upcoming revival we wouldn't cave just yet.

Nintendo Switch deals briefly returned to the US last week, with GameStop offering larger bundles full of games and controllers with the Neon console. However, those have since run out of stock so we're back to searching for elusive Nintendo Switch Lite handhelds for now. We're keeping a close eye on new stock of both models, so stay in touch because this is the first place we'll share news.

Nintendo Switch deals were returned to us last week, with Amazon, Argos and Very all bringing their own consoles and bundles to the party. This week, we're still seeing stock available at Very and Argos at the time of writing, as well as pre-order options from Nintendo itself.

Nintendo Switch | £279.99 at Very
This Very Nintendo Switch deal can send you home with a neon console for the standard RRP of £279.99 right now. That's £20 cheaper than the Amazon stock below, so move quickly. View Deal

Nintendo Switch | £279.99 at Argos
This is a long shot as Argos organises its stock by region, but you might strike lucky and find some inventory in your local store since this console has just been brought back to life on the Argos website today. There's plenty available right now, but don't sit on it too long.
View Deal

Nintendo Switch (pre-order) | £279.99 at Nintendo
You can also pre-order stock of the Nintendo Switch for the standard price through Nintendo itself. These will ship on the 30th June, however, so you might be better off shopping elsewhere if other stock is still available.
View Deal

Nintendo Switch Lite | £199 at Currys
Currys is one of the few retailers with Nintendo Switch deals still in stock this week, albeit on the handheld-only Lite model and only for in-store collection. You can still purchase your console through the Currys website, but you'll have to travel to your local store to grab it.

Edge magazine subscription deals start at just £15
Need help deciding what to play on your new Switch? Edge magazine has reviews and previews of all the latest games, as well as news and insight from across the industry. As one of the oldest and most trusted in the business, Edge has got you covered. Subscribe now from just £15.
View Deal

Nintendo Switch bundles: how to spot a good deal

Just because a Nintendo Switch bundle is cheap doesn't make it a good deal. Many retailers often include cheaper games with their Nintendo Switch bundles and still charge standard price. Games readily available for $20 - $30 can sneak their way into the premium-priced deals, lowering the overall value of the offering. In this case, it's worth picking up a Nintendo Switch deal with a full $60 game and grabbing the cheaper title separately if you're desperate to play it. For this reason, it's always worth double checking the going price of the bundled game you're picking up against the overall cost to make sure you're getting a good deal.

The Nintendo Switch Lite was recently released at just $199.99/£199.99. That's $100/£80 less than the original Switch console. If you want to play games on the TV as well, you should go for the standard Nintendo Switch instead as the Lite is only playable in handheld mode.

The Nintendo Switch Lite comes in multiple colour options. You can pick one up now in turquoise, gray and yellow. There will also be a special edition Zacian & Zamazenta Edition released on November 8 to celebrate the release of Pokémon Sword and Shield. It doesn't come with the game, but doesn't cost anything extra either. If you want to learn more about the console and see prices for every individual color and bundle, check out our Nintendo Switch Lite prices and deals guide.

How to buy the right Nintendo Switch

The updated version of the original Nintendo Switch is now being rolled out with an improved battery. That's the only change, but prices are generally the same as the older model. The old version model number was HAC-001 and the box featured a lifestyle image with a hand grabbing the console. While the new model number is HAC-001(-01) and the box has an all-red background and no hand.

What are the Joy-Con controllers?

The Joy-Con controller is actually a pair of controllers that attach to the sides the the Nintendo Switch when not in use or when playing in tablet form away from the TV. When playing the Nintendo Switch on the TV, you can remove them and play with one in each hand. The left hand gets a controller with an analogue stick and d-pad, the right hand handles the one with a second analogue and the usual A, B, X and Y face buttons. Or you and a friend can use one each in multiplayer games with the d-pad doubling up as impromptu face buttons.

You get a pair with the console, but you might want to buy more to allow extra players to get involved in games like Mario Kart 8, FIFA 19 and many more. Or maybe you just fancy some different colors for your own use.

The Joy-Con Grip is an additional accessory that joins the two Joy-Con controllers together, forming something something a bit more solid for you to hold thanks to the extended handles and plastic block between the two sides. The square dimension form-factor may remind older gamers of the Dreamcast controller, while everyone else will mainly be thinking how it resembles an odd-looking dog face. Nintendo is providing one in the box with the Nintendo Switch, so you won't have to buy one separately. This won't charge your controller though and doesn't have a battery pack.

Do I need to buy extra controllers for multiplayer on Nintendo Switch?

Possibly not! Remember how the Joy-Con controller splits in two? Turn them sideways and you get two basic controllers, each with their own analogue stick and face buttons - the d-pad acts as face functions on the left controller. We've seen 2K's NBA series, Snipper Clips, FIFA 19, and Mario Kart being used this way for local multiplayer in both docked and tablet modes. So you get multiplayer functionality straight out of the box with no additional purchase required.

However, if you want to play four-player games, then you're going to need to invest in an extra pair of Joy-Con controllers or some Pro controllers. We'd buy the Joy-Cons as a pair (see our comparison chart above) as you'll save a bit of cash over buying them separately. Better yet, if your friends own a Switch, ask them to bring their controllers to the party!

With only 32GB of internal storage, you'll be wanting to pick up a cheap memory card or two for your new Nintendo Switch for any digital purchases or the inevitable game-fixing patches. Don't fret though, they're actually surprisingly cheap, with even 64GB ones coming in at under £20/$25.

What memory cards does the Nintendo Switch need? Those will be Micro SD cards also known as, depending on their size, as MicroSDHC (up to 32GB) or MicroSDXC (up to a huge 2TB soon). Nintendo also has their own branded cards, but you'll be paying more just for a label. So for now, we'd take a look at this range of cheap MicroSDXC Nintendo Switch-friendly cards.

Source: Future - All the latest news

Uber suspends Uber Pool shared rides in the U.S. a ... Apple could ditch Intel in its MacBooks and Macs b ... Why any corporation needs at least 1 DevOps Engine ...
What's EC2 (Amazon Elastic Compute), and why to us ...