AMD looks set to maintain its CPU process lead in the future, with new rumors emerging about it shifting to five nanometers in the future – and what kind of performance boosts we can expect from that.

With its Zen 2 processors, AMD leapfrogged its rival by shifting to the 7nm process. Meanwhile, Intel is still struggling with producing 10nm CPUs – and has admitted that it won’t catch up with AMD and its 7nm process until 2021.

While we’ve known for a while that AMD is aiming to produce 5nm Zen 4 CPUs in the future (Zen 3 is slated for release towards the end of 2020, and will use a refined 7nm process), we’ve now got a hint of the kind of performance we might see from AMD’s 5nm chips, thanks to an article on WikiChips.

The article examines the future plans of TSMC, the company that works with AMD to build its processors, and suggests that “TSMC reported 1.84x density improvement over the company’s own [7nm] node. Our estimates land at 1.87x which is reasonably close.”

As PC Gamer points out, if these numbers are accurate (and remember, this is a big ‘if’), it could lead to around an 85% increase in transistor density compared to 7nm designs – a very significant increase.

Because transistor density is a key ingredient in the overall performance of a processor, this could mean that 5nm Zen 4 processors could see huge boosts to compute performance and power efficiency, and could further leave Intel’s processors in the dust. 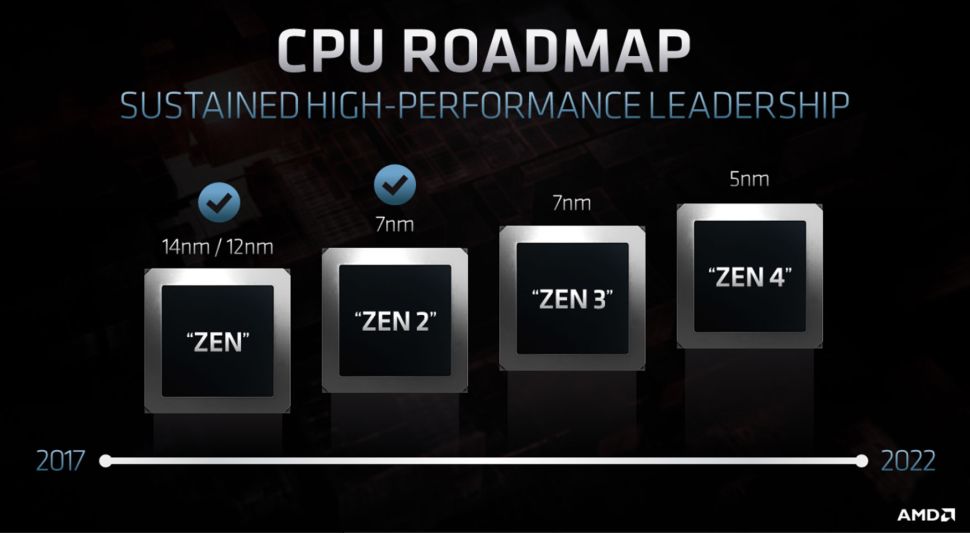 All about the nanometers

Moore’s Law, for example, was an observation that the number of transistors on a chip should double every two years, while costs are lowered. For many years since Gordon Moore published a paper on the subject in 1965, this was generally the case, which is why we’ve seen computers (and other devices like smartphones) drastically increase in power, while getting ever smaller and lighter.

Recently, however, things have slowed down noticeably, and Moore’s Law doesn’t seem to apply as much these days, especially when it comes to Intel. This is ironic as Moore was once CEO of the company.

With AMD looking to move to 5nm and reap those performance rewards, the pressure is on Intel to catch up. As we mentioned earlier, while Intel has been producing 10nm laptop processors, we’re still waiting for 10nm Intel desktop processors. At the moment on the desktop side, Intel is still on 14nm.

According to AMD’s roadmap, we could see Zen 4 before 2022 – so if it does indeed release at that point with 5nm designs, then Intel could find itself even further behind its competition. Castlevania season 4 on Netflix: will it happen? ... HTC is still making phones, as it launches the tri ...