We know what you're thinking: what's a headphone amp and do you really need another new bit of kit?

The thinking behind DACs and amps is that, when you press play on your phone or speaker, the sound that comes out often isn't as the artist intended. We've found it should often be clearer, crisper or offer up more bass.

There is a ton of work that goes into reproducing sound the way it should be heard – whatever that might mean. From the way the music is recorded to how it's stored, from what headphones or speakers you use to the source's DAC and amplifier, every step in the journey to your ears can affect how the music sounds.

Of course you could just get used to how your phone plays music. But if you're an audiophile that just won't do. So, if your music isn't sounding quite as spectacular as it should – and the only thing you've changed recently is the source – it's likely that your new device (a new laptop, desktop, phone or tablet) has a poor quality DAC.

A DAC, or Digital-to-Analogue Converter, is the device that takes the bits and bytes stored in a digital music file and converts it into something a headphone or speaker (analogue devices) can playback.

What is the best DAC? 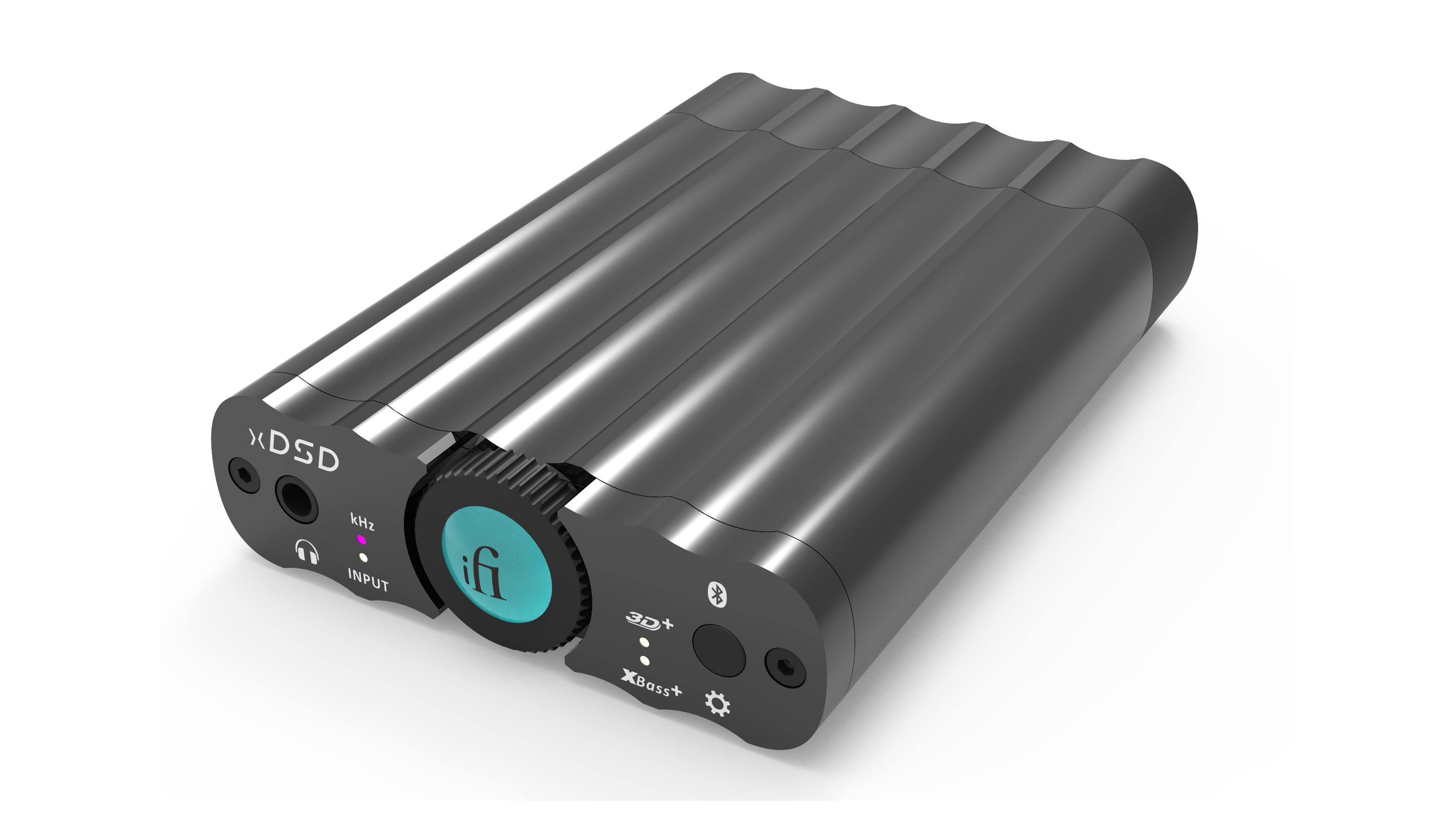 It’s a close race between the xDSD and the Chord Mojo, but one thing's for sure: iFi's distinctive take on the DAC brings plenty of new ideas to the table.

The iFi xDSD is certainly eye-catching, with a ribbed metal casing and glossy finish giving a smartly premium look. Out of the box you’ll also get a velvet carry pouch and even some strips of velcro (remember velcro?) to strap the DAC to the back of your smartphone, if you're into that.

The optional Bluetooth connection is hugely practical, utilizing an aptX compression format to stream wirelessly without needlessly impacting the audio quality. The Type-A USB is also much friendlier than micro USB for connecting to either Android or Apple devices. (iFi's cheaper sister product, the iFi xCAN, offers much the same specs but as a dedicated headphone amp without the USB port.)

You'll get the most benefit when using the fancier audio formats out there. Unlike Mojo, the xDSD supports the hi-res MQA (Master Quality Authenticated) format found on Tidal's Masters tier and the like. It's able to play both DSD and PCM audio in their native formats, rather than converting one to the other – and risking further loss – before it reaches your ears.

Using the DAC gives a sense of a careful control, aided by an analog volume wheel and numerous other settings to truly fine-tune your music, with separate settings for optimized mids (Listen) or frequency-agnostic (Measure) output. There are even options to gently boost the bass, or turn on the '3D+ Matrix' for a live performance feel – widening the soundstage for a sense of scale and presence beyond usual stereo.

Some will love the level of control and experimentation this affords them, though others may prefer 'one setting' DACs that don't require as much interference. The Chord Mojo (below) is still probably the natural choice for those wanting an industry-standard portable DAC that does the job in as few steps as possible. 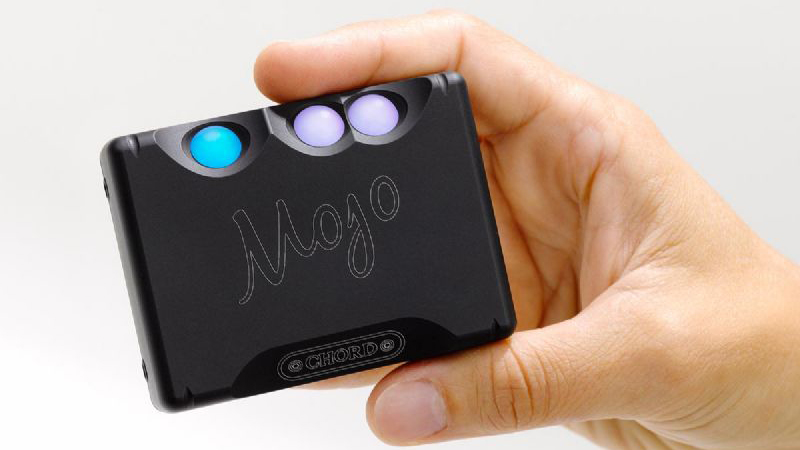 The Mojo is one of the larger DACs we've tested as a result of the onboard battery that needs to be charged before you can use it with your iPhone.

Having to charge an extra device – even if that charge lasts for 10 hours – before listening to music out and about is hardly ideal, but that's the price you have to pay for the Mojo's more power-hungry innards.

Thankfully the Mojo puts that power to good use, delivering a much rounder sound than the stock iPhone jack. Without the Mojo the treble and bass frequencies tend to take over, but introduce the external DAC into the mix and the mids are much more present and full.

The device's size means it's a bit cumbersome, and not exactly an inconspicuous accessory. I ended up carrying the Mojo in my front pocket (where I could easily access the device's volume controls), with the USB cable leading to my phone in my back pocket.

This probably won't be your ideal setup, and that might mean leaving the Mojo behind when you're going out on the town. Using the device at work, where I'm able to leave both my phone and the DAC on the desk, is a lot more user-friendly.

Other features include a second headphone output and a cool lighting feature whereby the volume buttons change colour based on the quality of the music file being received. 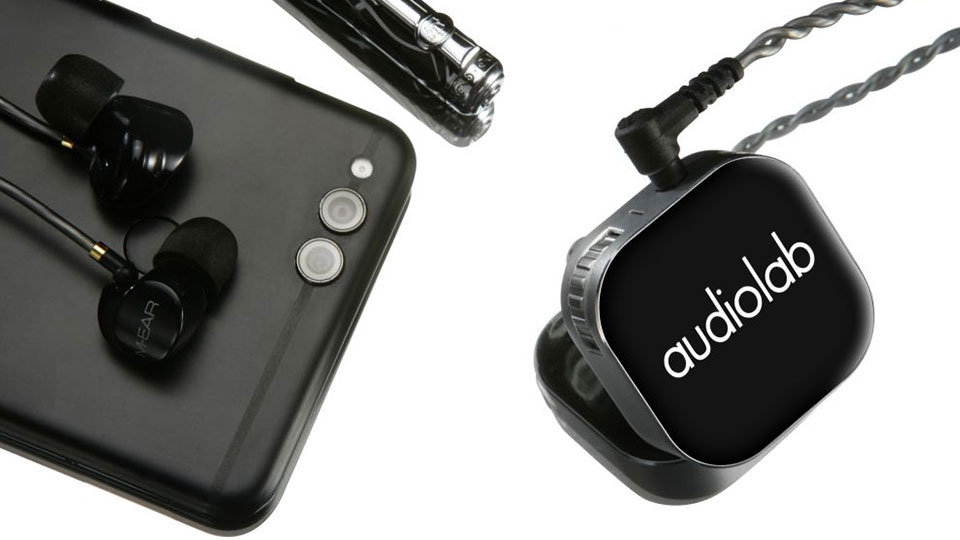 Don't be mistaken by the M-DAC Nano's diminutive stature – this is a powerful, pocketable piece of audio excellence.

A portable headphone DAC and amplifier at an affordable price, it'll boost the audio performance of any device that sends sonics via a Bluetooth connection. It's about as simple as this sort of gadget can get – simply connect the M-DAC Nano to your smartphone or Bluetooth player of choice, plug a pair of wired headphones into the Audiolab unit and away you go.

From here your headphones have a "wireless" connection to your phone, with a dedicated volume wheel on the M-DAC Nano. An "F" button on the unit enables 32bit / 384kHz upscaling, adding critical clarity and depth to your source's output.

You'll get 8 hours of playback with general use, and a limited but respectable 6 hours with the upsampling mode turned on too, driving headphones spec'd to 3000ohms with 7.5mw of power. Supporting Bluetooth V4.2 (with aptX, aptX Low Latency and AAC codecs accounted for) it's about as good a presentation as you're going to squeeze from a mobile.

With the headphone jack going the way of the dodo and smartphone amplifiers improving slowly but not to the standard an audiophile would appreciate, the M-DAC Nano is an affordable upgrade for the on-the-go muso in your life at a mere £149 (around $190). 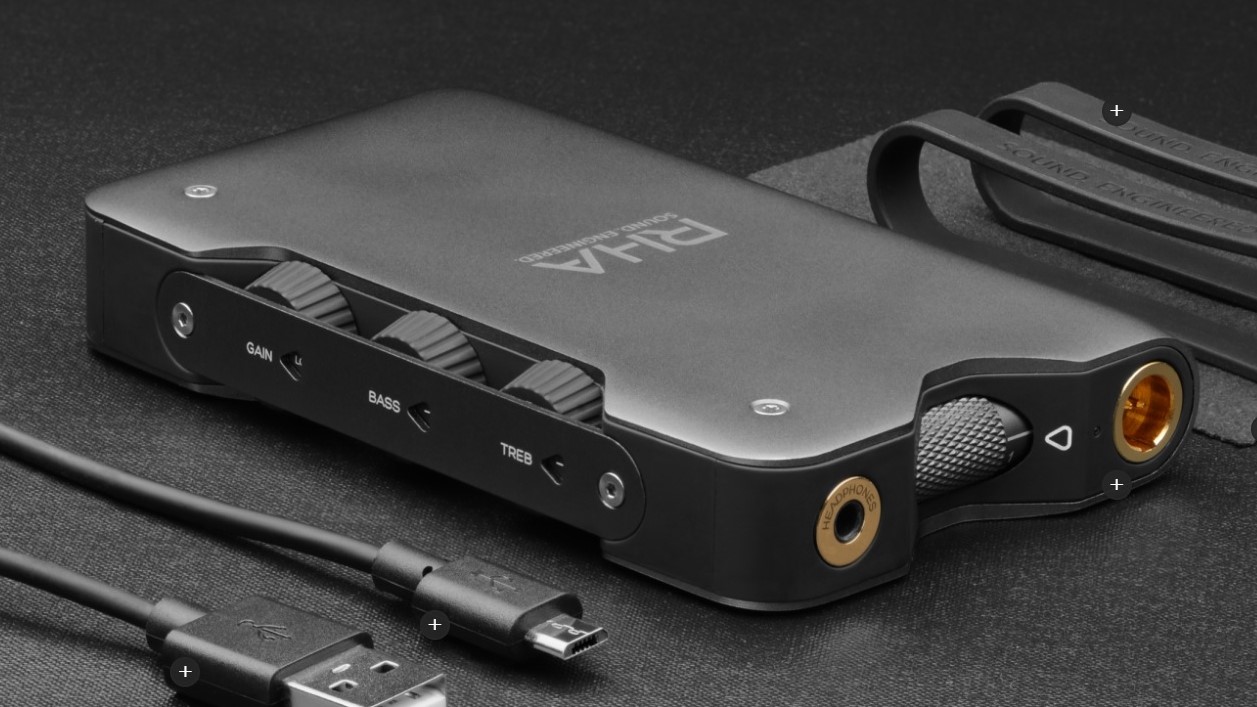 It's a close call between the Chord Mojo and the RHA Dacamp L1. While the Mojo offers a more compact form factor, the Dacamp caters to iOS users with a dedicated USB input. That being said, the Dacamp is a bit longer than the Chord Mojo and a fair bit heavier if you're the kind of person who doesn't mind hauling their audio gear around with them.

While it definitely fights for space in our already overcrowded backpacks, we genuinely love the Dacamp – it makes playback sound smooth even when playing music from some less-than-ideal sources and the adjustment knobs on the side allow you to do simple, subtle tweaks to the sound. The knobs might not offer the most robust of changes (moreso than a software EQ, for example) but we appreciate their existence all the same.

It comes in a very close second here, but RHA's Dacamp L1 is one of the better DACs to cross our desks and comes highly recommended. 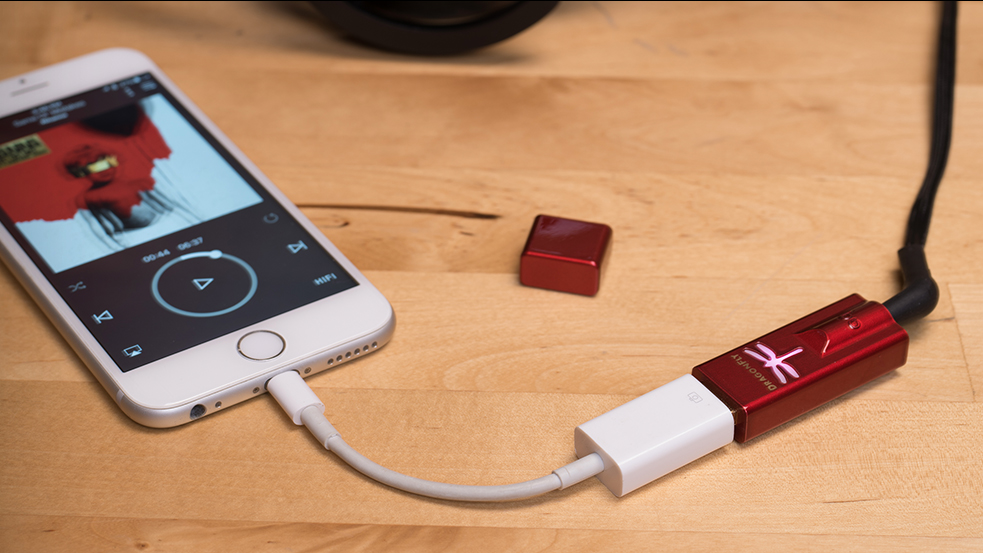 Audioquest basically invented the USB DAC with the original Dragonfly back in 2012, but until now the device's power demands limited it to desktop use, thanks to the iPhone's 100mAh limit on power draw through its lightning port.

But Dragonfly's latest devices completely change that. By using an all-new USB microcontroller, Audioquest's Dragonfly Red/Black's DACs now consume closer to 25mA, and can now be used happily with any iOS device.

This makes the Dragonfly a pretty compelling iPhone DAC. With a total size smaller than most USB sticks the Dragonfly fits easily into a pocket alongside an iPhone.

Dragonfly Red is the more premium offering. It contains a better DAC chip, and outputs 2.1 volts of power as opposed to the Black's 1.2 volts. That mean the Red is a better choice for driving high-impedance headphones.

With my headphones plugged directly into my iPhone I was comfortable listening to music with the volume set halfway, but with the Red I could listen at just a quarter and with the Black this was strangely reduced to just one volume bar.

In effect this means that you have a lot less control over the listenable volumes – turning the Black up just one volume notch meant that music was too loud, and turning it down one muted the iPhone completely.

Both versions, however, added a good amount of heft to the bass without sacrificing the clarity of mid frequencies. A playthrough of Daft Punk's Get Lucky didn't shimmer in the same way without the DAC than with it.

Whether you'll want to pay extra for the Red version depends entirely on how difficult your headphones are to drive – there's far more of a difference with power-hungry over-ears than budget in-ears.

Neither the Dragonfly Red or Black can match the refinedness of the Chord Mojo, but their budget price and much more practical form-factor make for a far better portable listening experience. 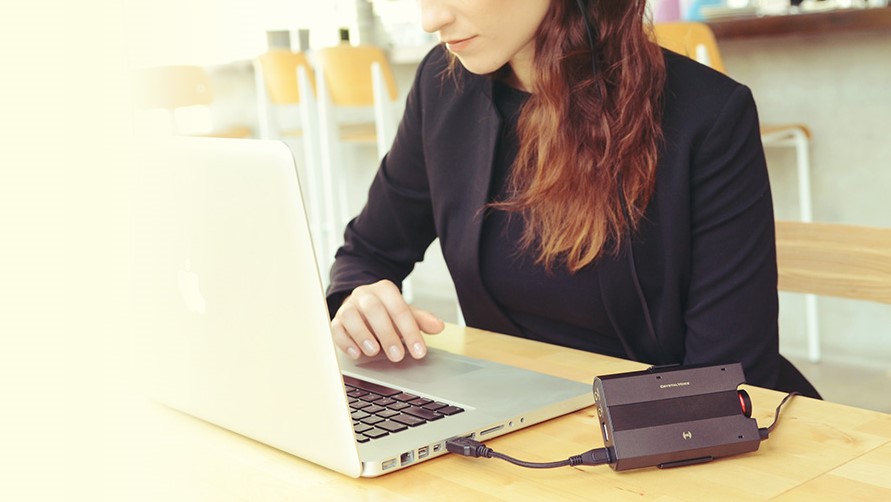 Creative Labs is a name you've heard before. It was the company that started the sound card craze in the late '90s and became king of the audiophile crowd for a short period of time. In the time since, Creative has been hard at work crafting extraordinary triple-driver in-ear headphones and an 11.2.4 soundbar while simultaneously working on a portable DAC for more ... uh, affordable price points.

The result of all that hard work is the Creative Sound Blaster E5 - the middle child in a large line-up of DACs that offers wireless connectivity options for those of us that can't be bothered with a cord.

While the idea of wireless is a great one, it's not without its limitations - Bluetooth can't transmit music at CD-quality without the help of more advanced codecs like LDAC or aptX HD. Because of that limitation, music over wireless just sounds OK. Sure, Creative can upscale it after it's been received, but it never sounds quite as good as native Hi-Res audio. Still, if wireless convenience is what you're looking for to power those powerful headphones in your closet, the E5 is far from the worst choice you could make.

The advantages of using an external DAC

So, to be clear, there's a DAC in your phone or other device. But that doesn't mean you don't need another,

The first advantage of using an external DAC rather than the DAC that comes built into your device, is that an external system will usually be better than the one

Simply put, external DACs will usually perform much better than those that come built in to your smartphone or equivalent playback device – usually because that aspect of the hardware usually isn't the priority in all-round media devices like phones or tablets.

The second reason to shell out for a better system is the fact that some of the more premium headphones on the market are 'high-impedance' headphones, which require more power through the headphone jack on your music source in order to work properly. (Impedance, for the record, is measured in a unit called ohms, and less than 50 ohms is considered to be low-impedance.)

The general consensus is that the harder a pair of headphones is to drive, the better they will eventually sound when paired with the right equipment.

An external DAC helps with these headphones as it can work as a headphone amp to provide the extra power needed to drive a high-impedance pair of 'phones. These are the essential tools for remote workers ... Slacks worth about 18x revenue, and theres n ...