Instagram is changing its advertising rules to require political campaigns’ sponsored posts from influencers to use its Branded Content Ads tool that puts a disclosure label of “Paid Partnership With” on posts. The change comes after the Bloomberg presidential campaign paid meme makers to post screenshots that showed him asking them to make him look cool.

“Branded content is different from advertising, but in either case we believe it’s important people know when they’re seeing paid content on our platforms. That’s why we have an Ad Library where anyone can see who paid for an ad and why we require creators to disclose any paid partnerships through our branded content tools. After hearing from multiple campaigns, we agree that there’s a place for branded content in political discussion on our platforms. We’re allowing US-based political candidates to work with creators to run this content, provided the political candidates are authorized and the creators disclose any paid partnerships through our branded content tools.” 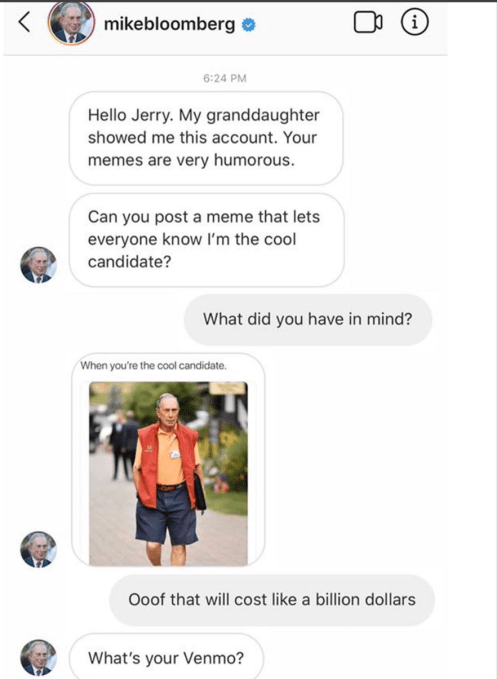 Instagram explains to TechCrunch that branded content is different from advertising because Facebook doesn’t receive any payment and it can’t be targeted. If marketers or political campaigns pay to boost the reach of sponsored content, it’s then subject to Instagram’s ad policies and goes in its Ad Library for seven years.

But previously, Instagram banned political operations from running branded content because the policies that applied to it covered all monetization mediums on Instagram, including ad breaks and subscriptions that political entities are blocked from using. It didn’t want to be sen as giving monetary contributions to campaigns, especially as the company tries to appear politically neutral.

Yet now Instagram is changing the rule and not just allowing but requiring political campaigns to use the Branded Content Ads tool when paying influencers to post sponsored content. That’s because Instagram and Facebook don’t get paid for these sponsorships. It’s now asking all sponsorships, including the Bloomberg memes retroactively, to be disclosed using this tool. That would add a “Paid Partnership with Bloomberg 2020” to posts and Stories that the campaign paid meme Pages and other influencers to post. This rule change is starting in the US today.

Instagram was moved to make the change after Bloomberg DM memes flooded the site. The New York Times’ Taylor Lorenz reported that the Bloomberg campaign worked with Meme 2020, an organization led by the head of the “FuckJerry” account’s Jerry Media company Mick Purzycki, to recruit and pay the influencers. Their posts made it look like Bloomberg himself had Direct Messaged the creators asking them to post stuff that would make him relevant to a younger audience.

Part of the campaign’s initial success came because users weren’t fully sure if the influencers’ posts were jokes or ads, even if they were disclosed with #ad or “yes this is really sponsored by @MikeBloomberg”. There’s already been a swift souring of public perception on the meme campaign, with some users calling it cringey and posting memes of Bernie Sanders, who’s anti-corporate stance pits him opposite of Bloomberg.

At least the Democratic field of candidates is finally waking up to the power of memes to reach a demographic largely removed from cable television and rally speeches. The Trump campaign has used digital media to great effect, exploiting a lack of rules against misinformation in Facebook ads to make inaccurate claims and raise money. With all his baked in media exposure from being President already, the Democratic challengers need all the impressions they can get. Windows 10 gets an app to help fix search problems ... China and the United States will compete for launc ... Why any corporation needs at least 1 DevOps Engine ...
AWS Encryption in Transit and at Rest ...