There have been plenty of rumors circulating about Intel’s next-gen Comet Lake desktop processors, and another major one just popped up, with an alleged leaked Intel document giving us a potential glimpse of the performance of the flagship CPU.

According to the document posted by a Weibo.com forum member, and spotted by Tom’s Hardware, Intel’s flagship i9-10900K will be up to 30% faster in multi-threaded workloads than its predecessor the 9900K.

Specifically, the document of ‘performance projections’ contains comparative benchmarks from SYSmark, SPEC, XPRT and Cinebench, and the biggest performance increase is seen in the SPEC results, which is where the headline ‘up to’ 30% faster comes from (in one result that is – some of the other SPEC benchmarks highlighted are more modest gains). 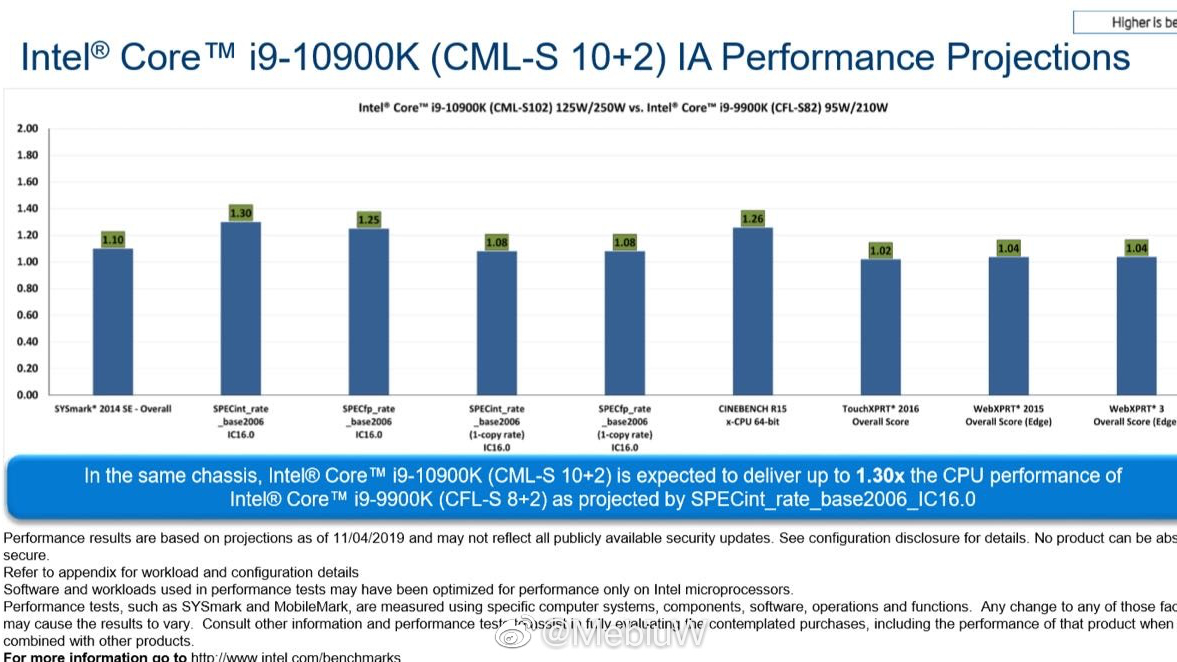 In Cinebench R15 the 10900K is 26% faster than the 9900K, which again sounds impressive enough at first glance, but of course we have to remember that this new incoming CPU has 10 cores, compared to the 8 cores in the 9900K. So in actual fact the 26% increase is pretty much reflected in the 25% upped core count here.

An interesting side note is that the material states that the 10900K has a TDP of 125W, with a TDP of 250W when fully extended pushing all-core boost clocks.

As you might anticipate, single-threaded gains are far tamer compared to multi-threaded, with the XPRT benchmark indicating around 4% better performance than the 9900K in single-threaded. All this is assuming that the purported Intel document isn’t fabricated in some way, naturally (and even if genuine, we have to remember that these are benchmark results cherry-picked by Intel).

Of course, these Comet Lake chips represent yet another refinement of 14nm, and there’s only so much Intel can do in terms of getting more out of that process. So outside of the increased core counts, there doesn’t appear to be a whole lot of extra performance boost coming from the next-gen processors.

Still, by all accounts it seems Intel is pushing clock speeds a little further with these Comet Lake chips, and as we heard in another recent rumor, it’s expected that the 10900K will be capable of hitting a Turbo speed of 5.2GHz.

As we mentioned at the outset, there have been an increasing amount of leaks around Comet Lake recently, and given that, we may well hear something official from Intel at the imminent CES 2020.

As we’ve said before, the processor grapevine indicates that Intel’s next-gen processors should arrive in early 2020, most likely in the first few months – although it’s possible that could slip to an April release, according to other recent speculation.

However, Intel really needs to get these chips out sooner rather than later, in order to better compete with AMD and its Ryzen 3000 processors which have gone down an absolute storm. Because Ryzen 4000 processors are on the horizon for later this year, of course, and Intel can hardly afford to let Comet Lake slide towards colliding with that new range of chips…

Naturally, a lot will depend on exactly where Intel pitches the price of its new Comet Lake CPUs, and it may well be feeling more heat than normal to increase the value proposition of these next-gen chips – although lingering supply issues remain a problem which could be pulling in the other direction, price-wise.

A Twitter app bug was used to match 17 million pho ... Some junk for sale on Amazon is very literally gar ... Disney Plus in April 2020: every movie and show in ...
What's EC2 (Amazon Elastic Compute), and why to us ...
Building the right Google Sitemap XML for Laravel ...