2020 has started with a bang as a pair of clamshell foldables have hit the market nearly simultaneously to duel over which is the better device. In one corner, the throwback Motorola Razr, and in the other, the surprise Samsung Galaxy Z Flip.

Typically, our versus pieces pick apart very similar phones to reveal granular but crucial differences. With the Razr and Z Flip, those differences are far more apparent. In general, the Z Flip has higher specs and a sharper display, while the Razr has a more svelte, distinct look.

What’s this mean? That the clamshell foldable smartphone is still very much in its infancy, and both of these particular devices were first to market – and were built in different labs that didn’t inform each other’s design. So while we might feel more strongly about one over the other, they’re distinct approaches to the challenge of constructing a typical smartphone that can fold in half.

So without further pontificating, here’s exactly how the Motorola Razr and Samsung Z Flip differ, section by section. 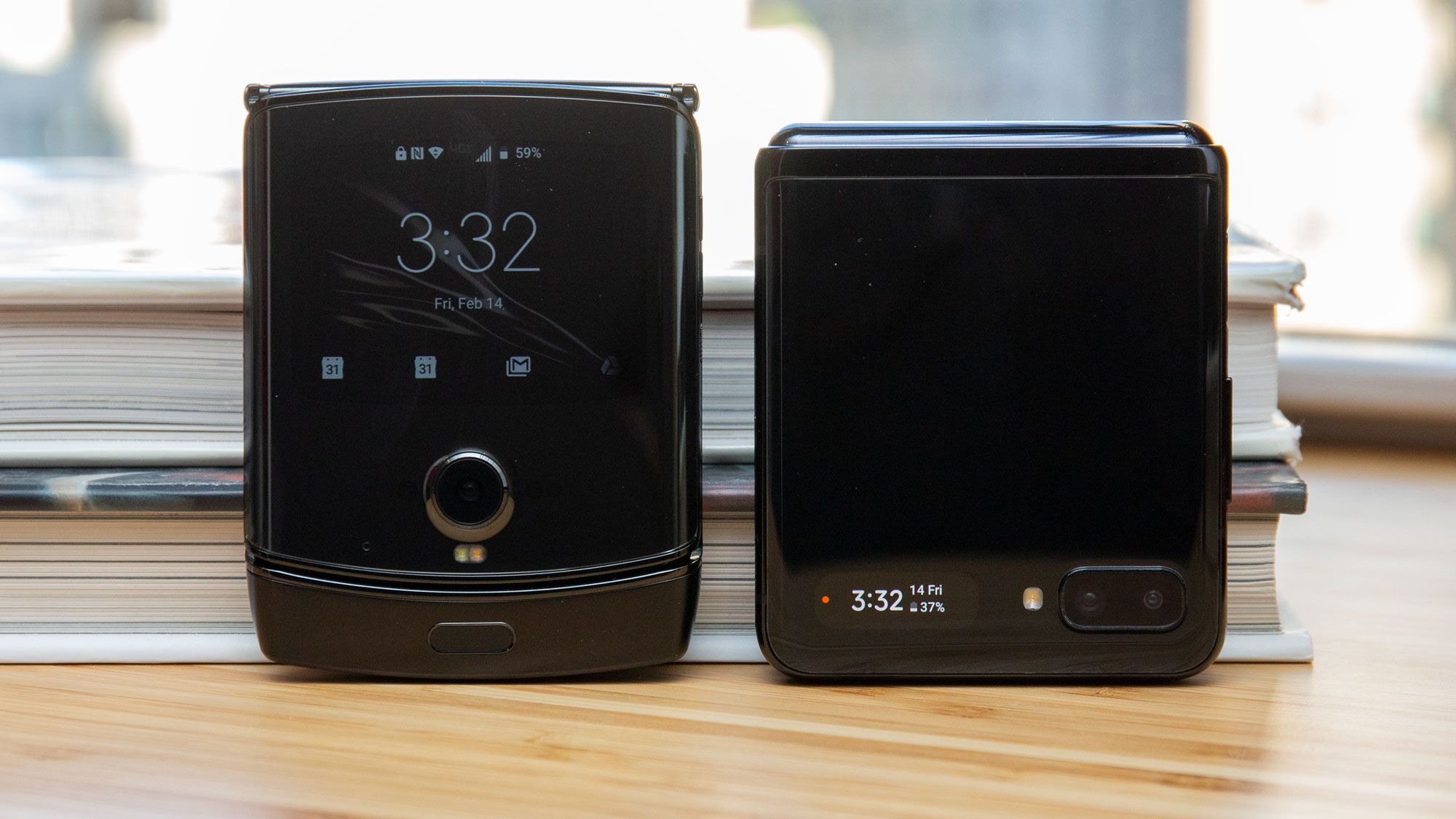 The Motorola Razr was revealed in November 2019, and despite delays due to supply issues, became the first foldable to hit the market when it launched on February 6, 2020 in the US. The Samsung Z Flip very quickly followed, with an introduction at Samsung Unpacked on February 11, 2020 and a release on February 14.

That’s not the whole story: the Razr is available exclusively from carriers in the US and UK (Verizon and EE, respectively), while it will be available in Australia on February 24 from JB HiFi and Telstra.

The Samsung Z Flip enjoyed a wider US release on AT&T and Sprint as well as retailers like Best Buy and Samsung’s website, 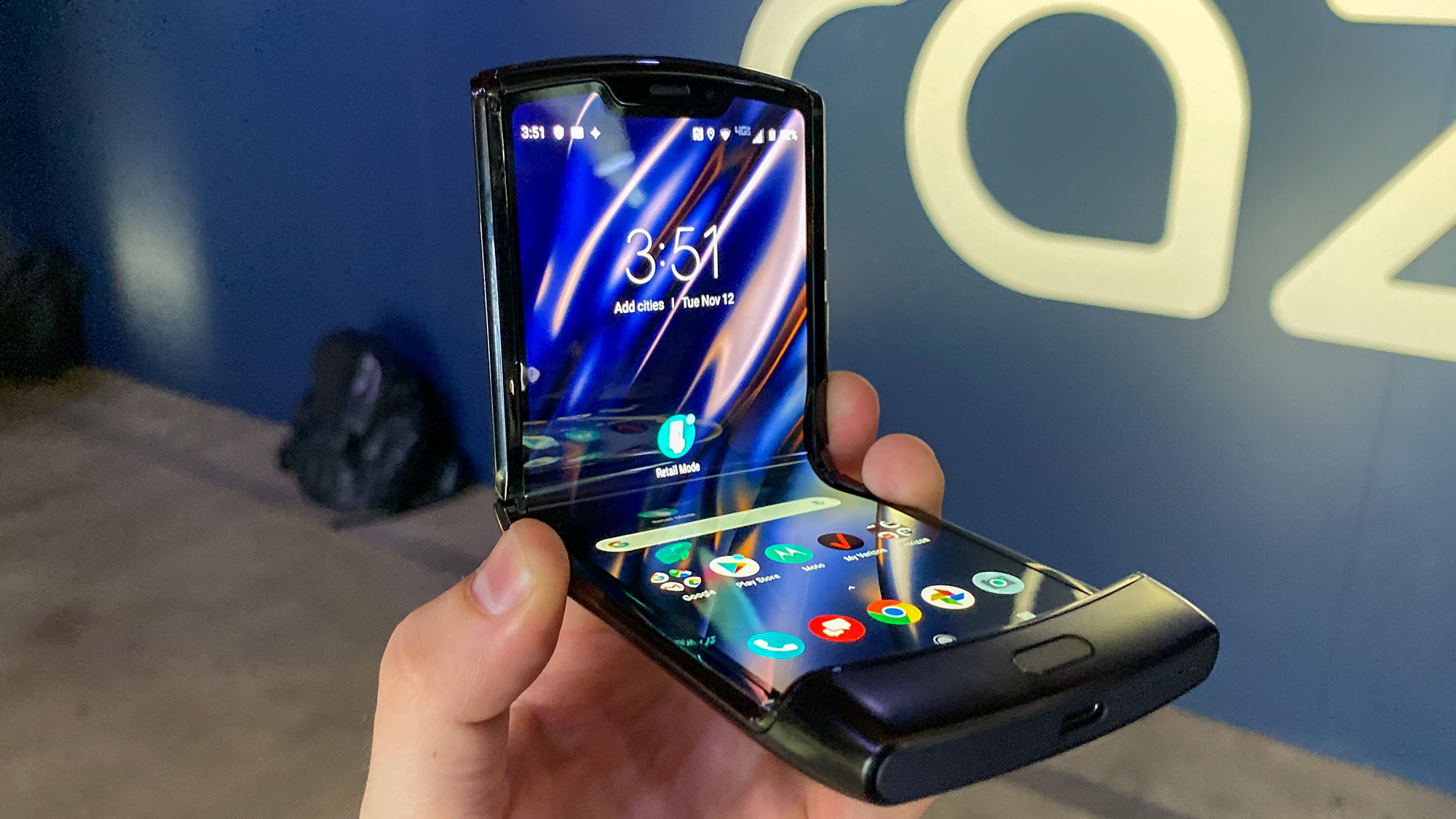 The similarities between both devices – clamshell foldables with an interior display about the size of a typical smartphone – belie their very real differences, in both design and use.

Let’s start with the obvious. Yes, both phones fold closed into a footprint about half the size of your typical smartphone, making them easier to fit in small pockets. That makes them thicker, though the Razr is the thinner of the two.

That’s because Motorola opted to revive the original Razr v3’s design: a sleek phone with a shorter top end that folds into the scalloped “chin” at the bottom. It’s definitely a throwback look, and while its spring-loaded hinges let it snap open and closed, there’s too much tension to keep the phone open at any other angle.

Not so with the Samsung Galaxy Z Flip. This phone can stay open at pretty much any angle, and there’s even additional functionality when used in this way, essentially splitting the display into two parts for, say, hands-free selfies. 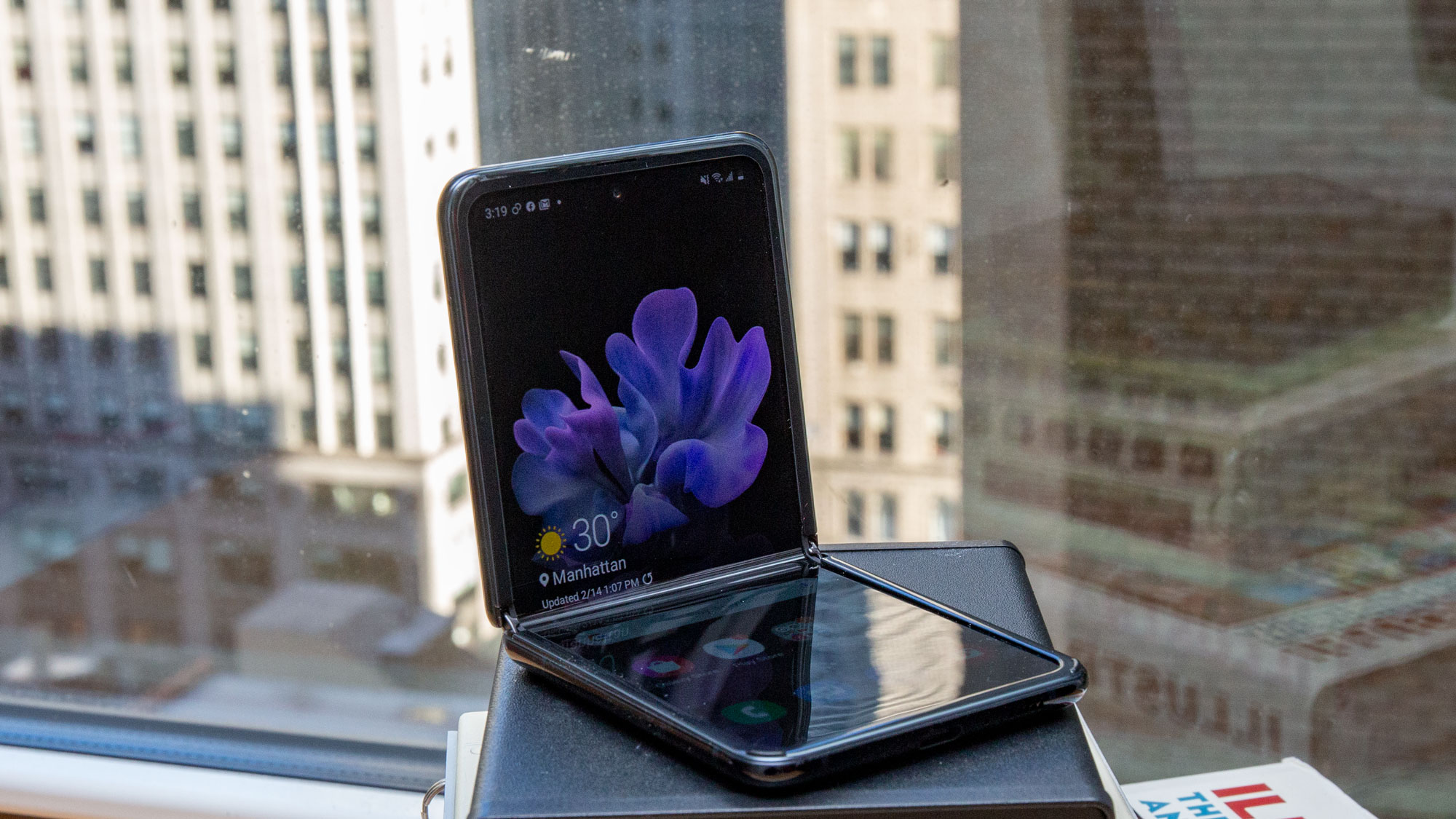 That’s representative of their user experience philosophies. The Razr is meant to be used open or closed, with a Quick Look mini screen for selfies and checking time or notifications. The Samsung Galaxy Z Flip can be used at a variety of angles, so its exterior display is very small, mostly used for time and basic media controls – though it will preview your closed-phone selfies.

The last big thing to point out: the Razr is more compact, but it also lacks a SIM/microSD slot, meaning you’re stuck with the included 128GB of storage. The Samsung Z Flip has a SIM slot but, again, no microSD slot.

As far as fingerprint sensors, the Razr’s chin-mounted scanner is erratic and only really registers if the finger’s exactly upright. The Z Flip’s side-mounted sensor located in the power button, imported wholesale from the Samsung Galaxy S10e, feels more forgiving in reading fingerprints,

Another contentious battleground for foldables is, well, their foldable display. As clamshell devices, both the Razr and Z Flip have interior screens that unfold into lengths comparable to a standard smartphone display. It’s their material that makes a difference.

The Razr is a plastic 6.2-inch P-OLED display, much like that found on the Samsung Galaxy Fold. It’s thin, and you can feel the hinge and phone surfaces underneath when running a finger over it. It operates just like a display on any other smartphone, though its width results in a narrow 2,142 x 876 pixel resolution, which we found is so slim that video was capped at 720p on YouTube.

The Z Flip has a larger 6.7-inch AMOLED display - and as Samsung claims, it’s made of an ultra-thin flexible glass, which is a development that phonemakers have been chasing to produce a superior foldable device. But that claim is in question, given that teardowns like those by JerryRigEverything have suffered grooves and scratches from duller materials much like a plastic display.

Durability is also a question for the Razr. In order to fold flat, it has a unique design that tucks the display into the hinge. After some time and a few folds, audible creaks emit every time the device is popped open. It’s not exactly an indicator of quality, but it is worrisome - and something the Z Flip doesn’t do.

You will pay a bit of a price for the privilege to fold: both phones have different protective measures around their main displays that get in the way of the interface. The Razr’s thick chin makes it a bit annoying to access any bottom-mounted navigation options, while the  Z Flip’s thick bumper plastic (first implemented in the revised Galaxy Fold to stop users from peeling off the screen protector) actually gets in the way of buttons or the navigation bar.

Finally, there’s the front screens. When folded up, both devices have small-to-tiny glass displays for checking the time, seeing notifications, and previewing selfies. The Razr has a much bigger 2.7-inch (600 x 800) screen, which works well enough, while the Z Flip’s 1.1-inch (300 x 112) screen is barely enough to track time - though you can use it to preview a selfie if you don’t mind squinting.

Both devices follow the same strategy: a main camera setup that can be used for selfies when the phone is closed (via the aforementioned mini screens), but which will primarily take photos while the phone is open.

The Motorola Razr’s single 16MP f/1.7 camera takes decent selfies, though we found it tough to focus front-facing shots through the mini-display. Fully open, the camera performed well in daylight and unremarkably in low-light, though its Night Vision mode helped. Its smattering of other modes are typical of Motorola, with the fun but niche-appealing Cinemagraph and Spot Color rounding out the more typical panorama and slow-motion video.

The Galaxy Z Flip wins out - on paper, at least, as supply shortages have meant we haven’t gotten our hands on the phone for longer than a 24-hour review period. But its dual 12MP f/1.8 main + 12MP f/2.2 ultrawide lenses make it a superior package, especially given how well a very similar lens duo worked in the Samsung Galaxy S10e.

Both devices also have smaller front-facing cameras at the top of their internal displays - for video chatting, say, or just to take a selfie while the screen is open. The Razr’s 5MP f/2.0 lens is fine and clear enough, though we’d expect a bit clearer shots from the 10MP f/2.4 shooter on the Z Flip.

Based on experience with previously-released phones from both brands, we’re willing to bet the Z Flip outperforms the Razr in terms of camera performance. But it’s not as much of a blowout as before given how much Motorola handsets’ cameras have improved. 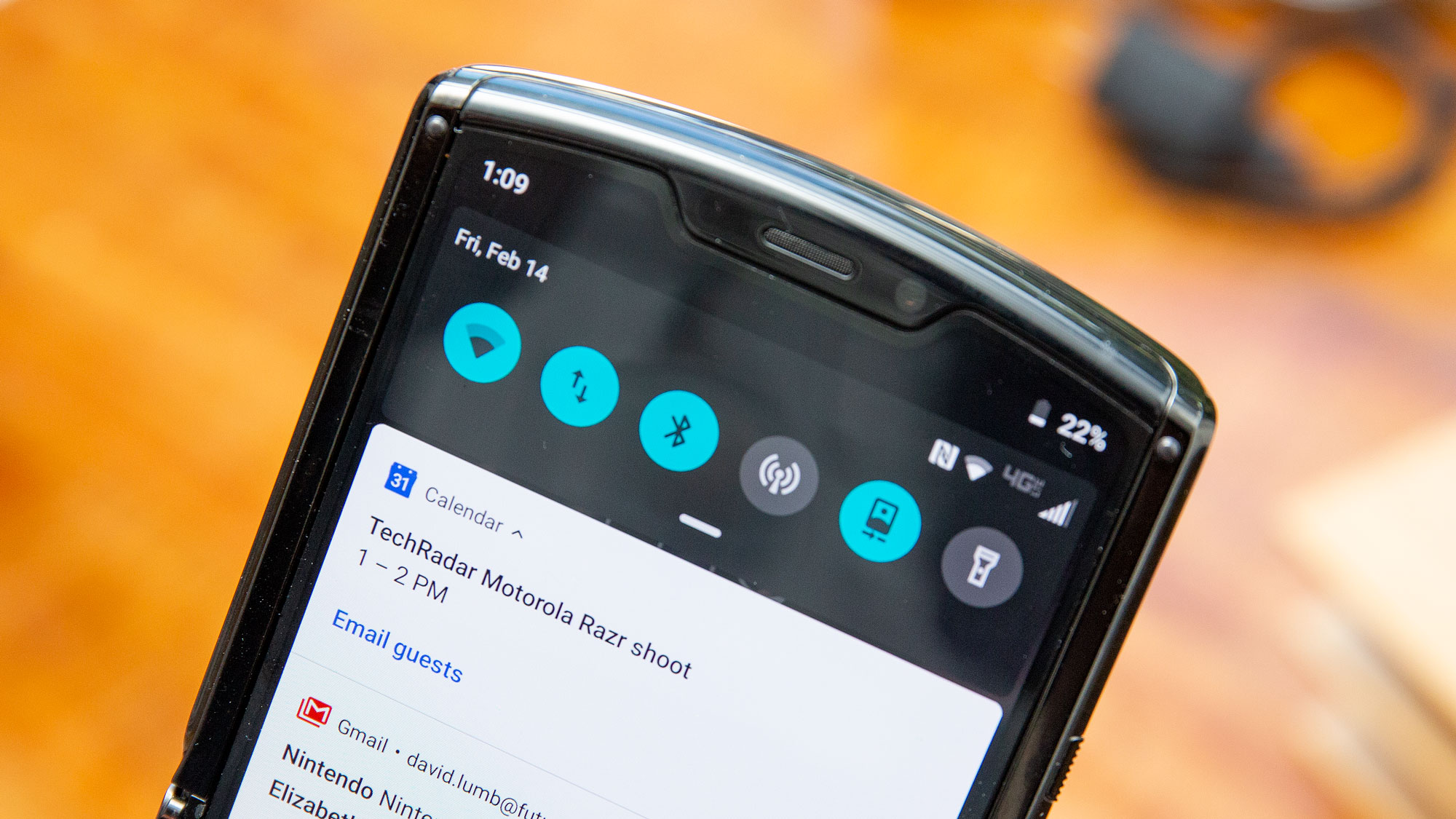 On paper, this versus will be a pretty clean comparison: the Samsung Galaxy Z Flip is a more powerful phone, full stop.

The  Motorola Razr still has respectable specs, but they’re more in line with mid-range phones, not pricey flagships. It packs a Snapdragon 710 processor, 6GB of RAM, and 128GB of non-expandable storage. In our testing, this was enough for typical use, web browsing, watching media, and gaming. The lower-than-expected chipset and RAM didn’t seem to hold the phone back. 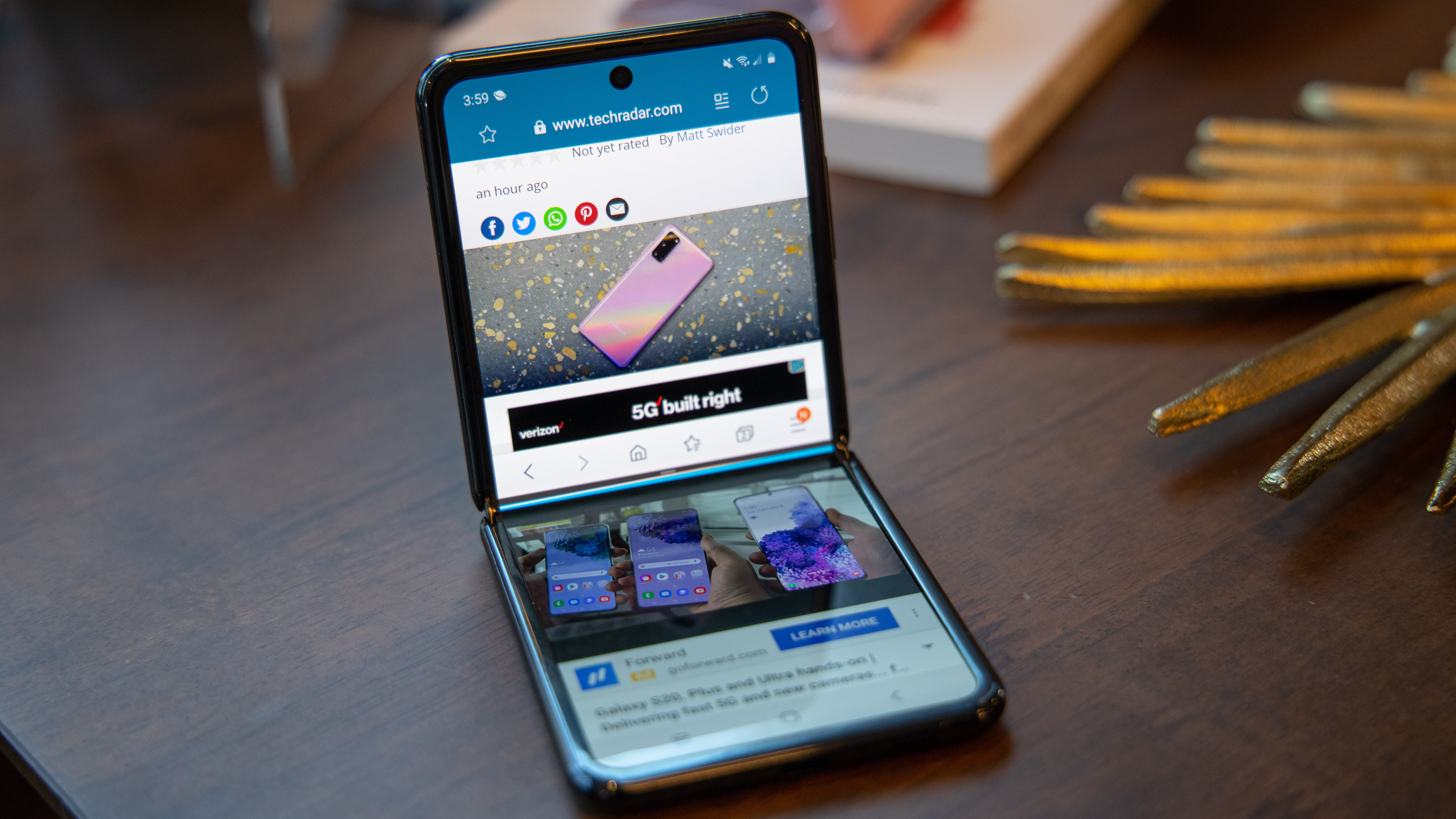 The Z Flip, on the other hand, packs the Snapdragon 855 Plus chipset, 8GB of RAM, and 256GB of storage - and on-device space might be its biggest advantage, given neither device can be bought in bigger configurations, nor can they expand via microSD.

If that wasn’t enough, the Z Flip comes with Android 10 out of the box, which is to be expected for any phone launching in 2020. But the Razr comes with Android 9, missing out on universal dark mode and new navigation options - some of which Motorola has added to the Razr as custom additions anyway, but not quite the same.

In another consequence of design, the Motorola Razr comes with a smaller 2,510mAh battery than the Galaxy Z Flip’s 3,300mAh capacity. We haven’t gotten to test the Z Flip, but those sheer numbers lead us to expect longer battery life.

That’s not a difference in layout, per se: both phones pack batteries in the top and bottom halves of the phone, per iFixit’s Motorola Razr and Galaxy Z Flip teardowns. We can only presume it’s a choice to pack as much in the available space, and the Z Flip seems to have more space.

Neither phone has terribly fast charging - the Z Flip maxes out at 15W versus the 18W for the Razr - but Samsung’s foldable does have the option to wirelessly charge, which Motorola’s does not. 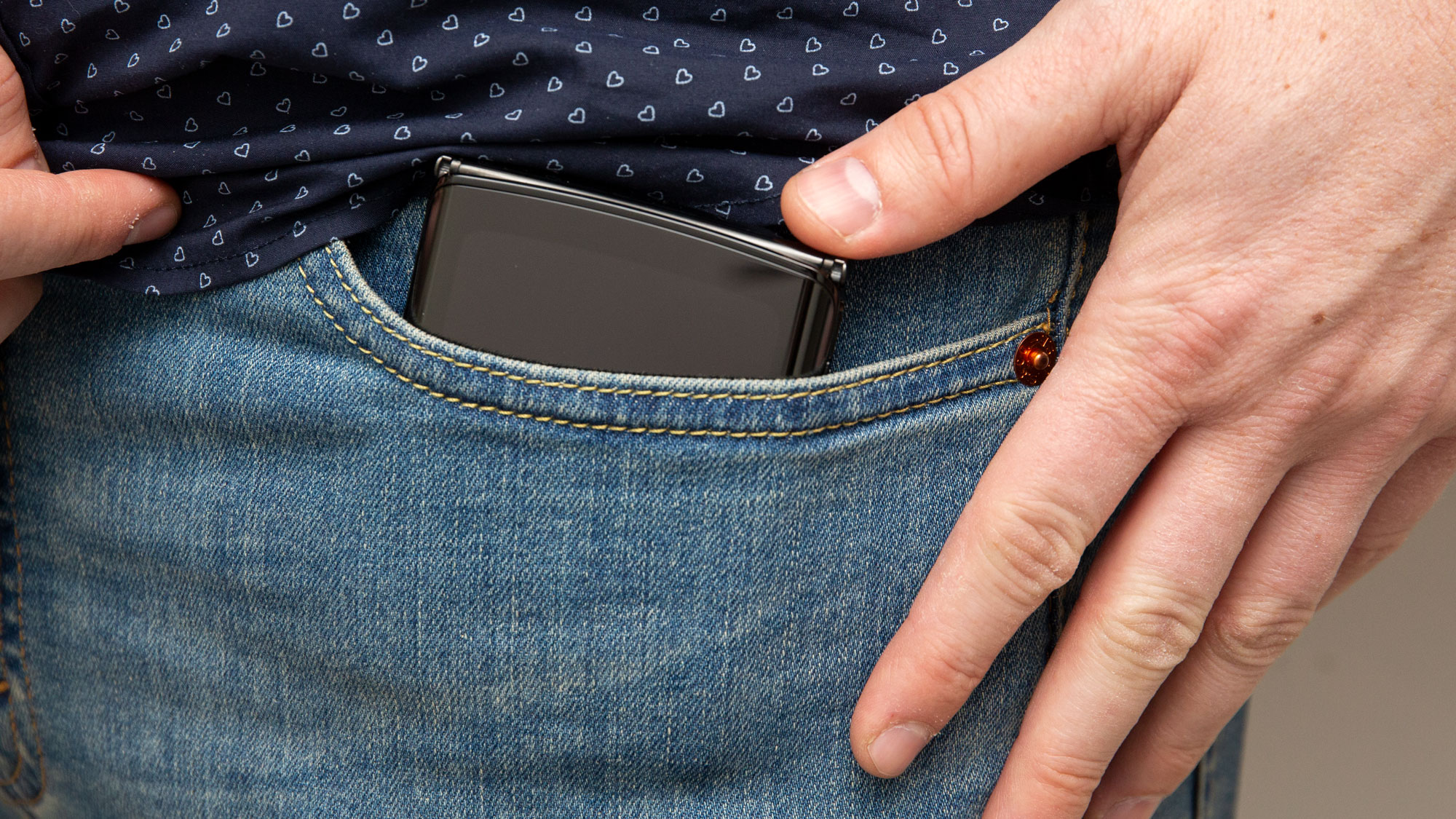 While the Samsung Galaxy Z Flip outshines the Motorola Razr in several (but not all) categories, we should restate that clamshell foldables are in their early days. These are two designs that approach the problem - how can smartphones fold? - from two different directions.

At the end of the day, that’s exciting. Competition lowers prices, spurs innovation, and trims away what we dislike. While both the Razr and Z Flip have things we like, including basic foldability and some neat features that take advantage of the format, there are still things we want, like better battery life, expandable storage and a headphone jack (always have to ask).

Hopefully that’s enough information to help anyone who’s picking between these foldables, but it’s also a look into the future of phones. In the coming years, we wouldn’t be surprised if folding functionality comes to cheaper and cheaper phones until it’s a standard perk that doesn’t push typical smartphone functionality up to premium prices. 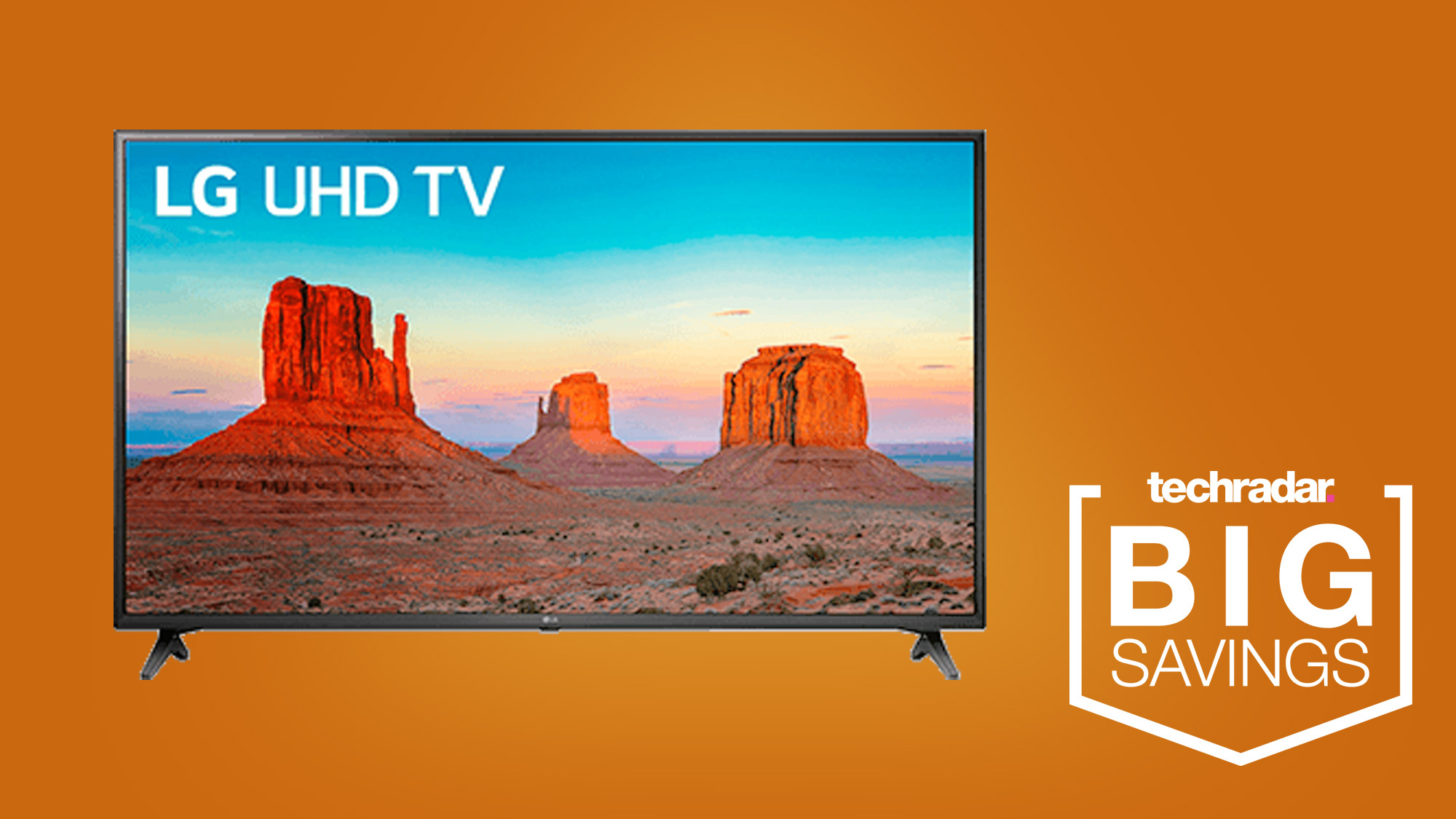 A group of ex-NSA and Amazon engineers are buildin ... Aurora can now give the public rides in its self-d ... The best 2-in-1 laptop 2020: find the best convert ...
Which Configuration Management Tool would you pick ...