PUBG Mobile Snow Paradise mode: All you need to know

Tencent recently released a new 0.16.0 update to PUBG Mobile, which brings about a lot of additions to the battle royale game. The latest update adds a RageGear EvoGround mode along with snowy landscapes in the Erangel map. The update has been rolling out since December 11 to all the players and is 0.67GB in size for both Android and iOS users.

The new Snow Paradise mode in the Erangel map follows the Day and Night modes where players are selected randomly. Here's what you should know about the snow-covered terrains of Erangel before you decide to jump in.

The developers have added a new mode to the Classic map, where players will be able to visit and play around the snow-capped peaks of Erangel. The Stalber peak is snow-capped along with a patch of land between Pochinki, School, Ruins, Hospital, and a mountain near Georgopol.

Just like the day and night mode that is generated on a random basis, the winter mode with snow in Erangel also selects players at random. 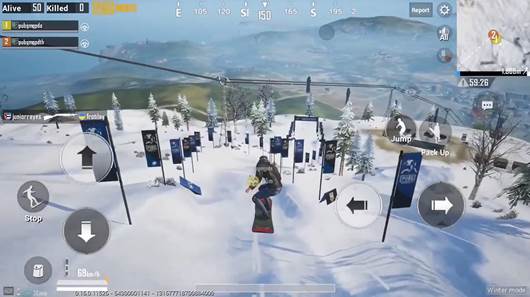 The players can snowboard or use cable cars to go up and down snowy landscapes. Each player is equipped with a snowboard option which pops-up when the game detects the presence of snow in the Erangel map. While snowboarding, players can also perform different freestyle stunts, but only after they reach a certain speed.

Snowboards only work in snow-covered areas, and going up a mountain on it will take a lot more time than just running up top.

In the Snow Paradise mode, special crates will spawn on three snow-covered peaks containing level 3 gears, weapons, and other necessary attachments. Players can also obtain Frozen Eggs from the special crates, which can be used to create an ice sculpture.

Players can use this to their advantage in close combat situations, especially if there's no cover in the last circle. Players can carry more than one Frozen Egg at a time, and each Egg can create snow chicken ice sculpture out of thin air.

The developers have also added Cable car stations at the foot and peak of the mountains for players. Every cable car fits a squad of four people, and you can fire weapons sitting in the car.

The new PUBG Mobile update also brings in a slew of feature upgrades to the classic mode, a new EvoGround mode, and more. You can read more about the update here. Warframe is coming to PS5 and Xbox Series X ... Best laptops for engineering students in 2020 ...