Microsoft was out in force at BETT 2020 and TechRadar Pro sat down with Anthony Salcito, VP Education, to discuss the company’s education technology (EdTech) strategy.

The software giant unveiled a range of small enhancements to its Office 365 product suite at the show, spanning tools such as PowerPoint, Teams, OneNote, Stream and Flipgrid.

The additions, according to Salcito, “reflect some of the broader trends happening in the world of technology. [Microsoft is preparing for] the next generation of learning that will extend far beyond the classroom.”

Exactly what he means by this becomes clear in the context of PowerPoint’s new feature, which allows teachers to broadcast their presentations to remote participants. The tool also supports real-time translation in more than 60 languages, allowing students of various nationalities to engage with the same lesson simultaneously.

OneNote also now offers Live Captions, which automatically transcribes lessons in real-time as the teacher speaks. The measure is designed to help both the hard of hearing and those who struggle to keep up with the pace of a lesson and need to refer back at a later date.

Microsoft’s upgrades have clearly been developed with inclusivity in mind - a product of continued consultation with schools. Salcito was particularly enthusiastic about the role teachers played in steering this latest raft of upgrades.

“We’ve been really listening to and learning from educators as we evolve the products and technologies we’re delivering. As opposed to saying ‘here’s this new thing’, we’re building based on what we see schools using and the needs that have been identified,” he said.

Microsoft also published new research at the show, examining the future of teaching in the context of technological advances. Among other insights, the report found that some education professionals harbour concerns about the introduction of technology to the classroom.

36 percent fear the loss of traditional skills and knowledge, 34 percent think students spend too much time on devices already, and 28 percent said they thought classroom tech could prove a distraction. 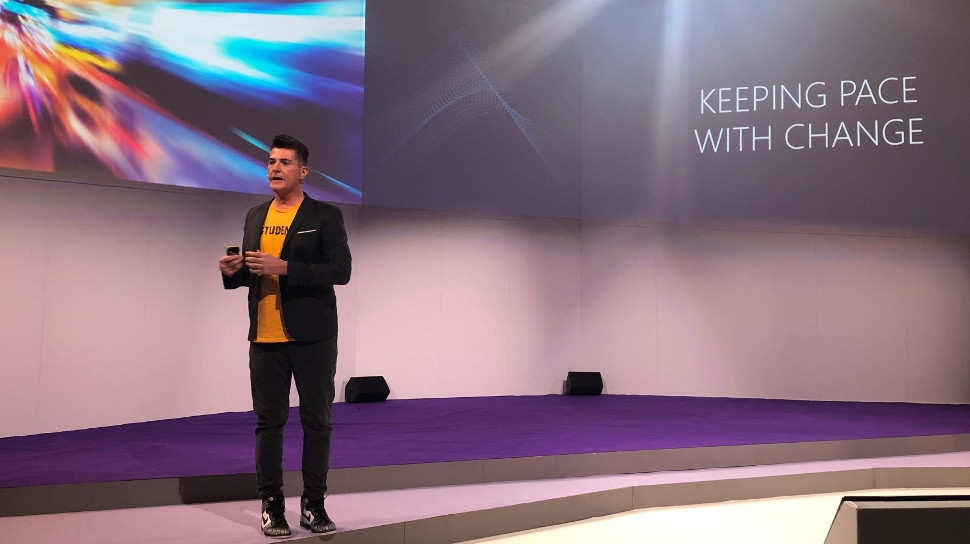 Asked about these concerns, Salcito (pictured above) noted: “I care a lot about the value of using technology as a tool. Just as learning should be purposeful, technology [in the classroom] should have a distinct purpose too.”

“I would argue that the narrative around technology should shift away from [optimising] the classroom, and towards using technology as a canvas for the expression of student creativity.”

To date, schools have perhaps focused too closely on using technology to optimise individual lessons and digitise materials, giving rise to concerns about issues such as screen time. However, Microsoft believes we’re on the way to realising the full potential of technology in education - it’s less about technology for technology’s sake, and more about purpose and inclusivity.

For now, there is room for improvement, but overall Salcito appeared positive about the perception of EdTech and the role it will play in securing a successful future for students.

“Every government now recognises education fuels the future and economic prosperity. There are no doubts about the value of education technology spend. The only question governments are asking is precisely what to spend on,” he said.

Microsoft believes it has the answers to that very question. 7 INVENTIONS THAT WILL KILL YOUR BOREDOM ... Could remote working be the future of work? ...