In the first week of December, Samsung released its most recent pinnacle in display technology in India - The Wall microLED display. Samsung invited us to experience what The Wall and their latest microLED technology are all about.

We went to Samsung's experience center and the setup looked like a dream cinema room, but the first thing that we bet anyone would notice will be The Wall. The screen commands attention. Unsurprisingly, because of its gigantic size that spans up to 292-inches with 8K resolution. However, we got to see the smallest 146-inch 4K setup, which is still double the size of today's largest consumer TVs that usually max out at 75-inches.

We want to take a moment to appreciate the company for giving it the most fitting name, but for reasons different than what you know Rahul Dravid for, The Wall not just covers your wall but also tries to imitate it with some exciting digital art. But it's not just another showpiece, as it can also do everything you do on your smart TV.

The interesting fact is, Samsung says it's not a TV although it can function like one. They're right, it's more than a TV, and it's not primarily meant for households unless you can fit in a minimum of 146-inches at your home and pay more than Rs 3.5 crore.

While its use cases also suit a home space, The Wall is a commercial-focused product. But there's a high possibility that Samsung might come up with a consumer-focused microLED TVs in relatively smaller sizes. Note that Samsung had introduced a 75-inch variant of The Wall at the global announcement, but that did not make it to India. 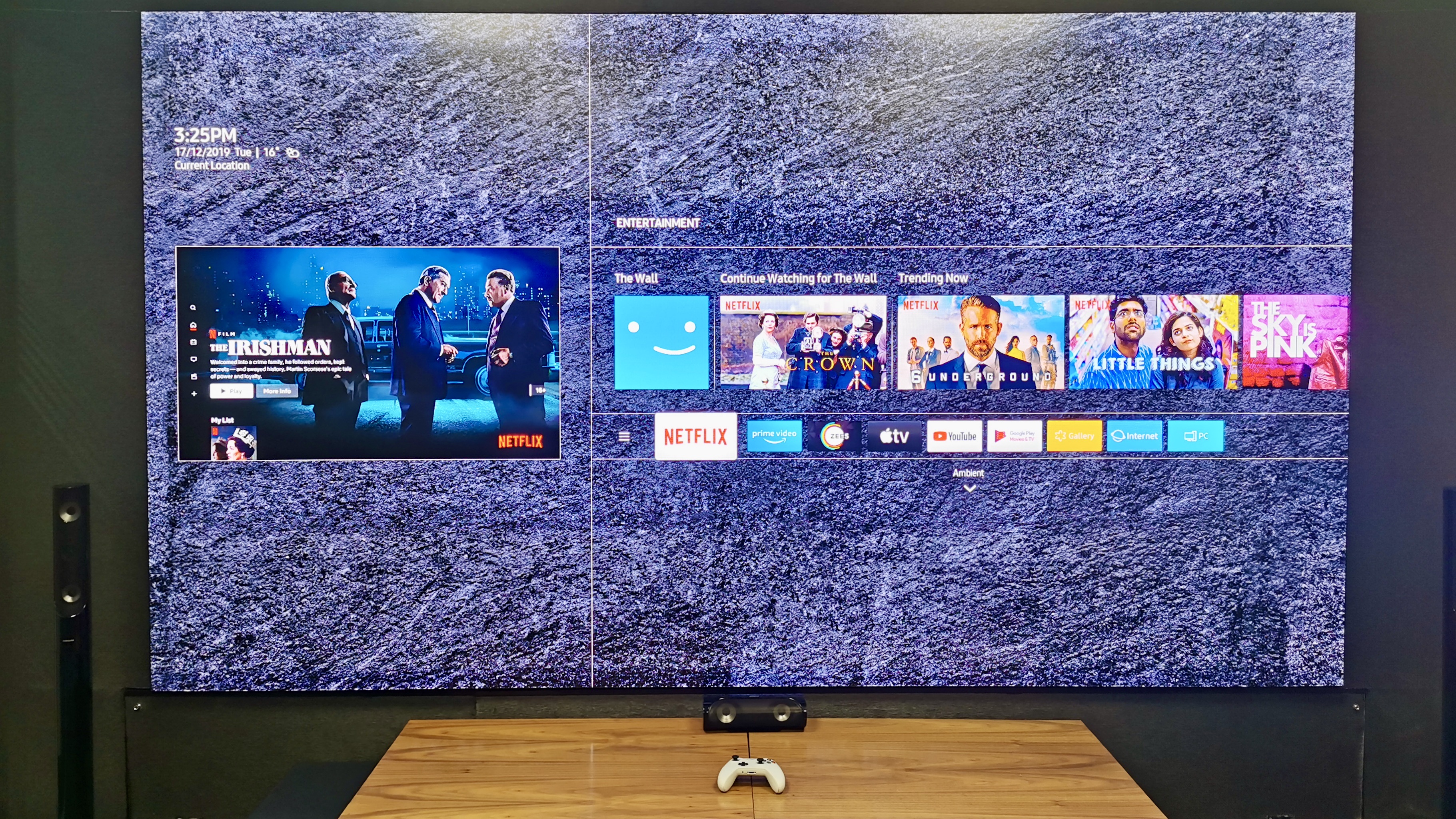 Why is The Wall so expensive?

The main highlight of The Wall display is its microLED technology, and precisely the reason why these screens seem to be priced exorbitantly high. Note that it is the only new display technology that has been commercialized in more than a decade after OLED was commercialized in 2008. We're about to enter 2020, and OLEDs have now started to become mainstream in the Indian market and is not limited to TVs, but phones, laptops, and even wearables.

Similarly, microLED is going to take its time before it reaches anywhere close to getting affordable for middle-class homes. Till then, you might see it in hotel lobbies, corporate offices, VIP lounges, art galleries, and the likes. 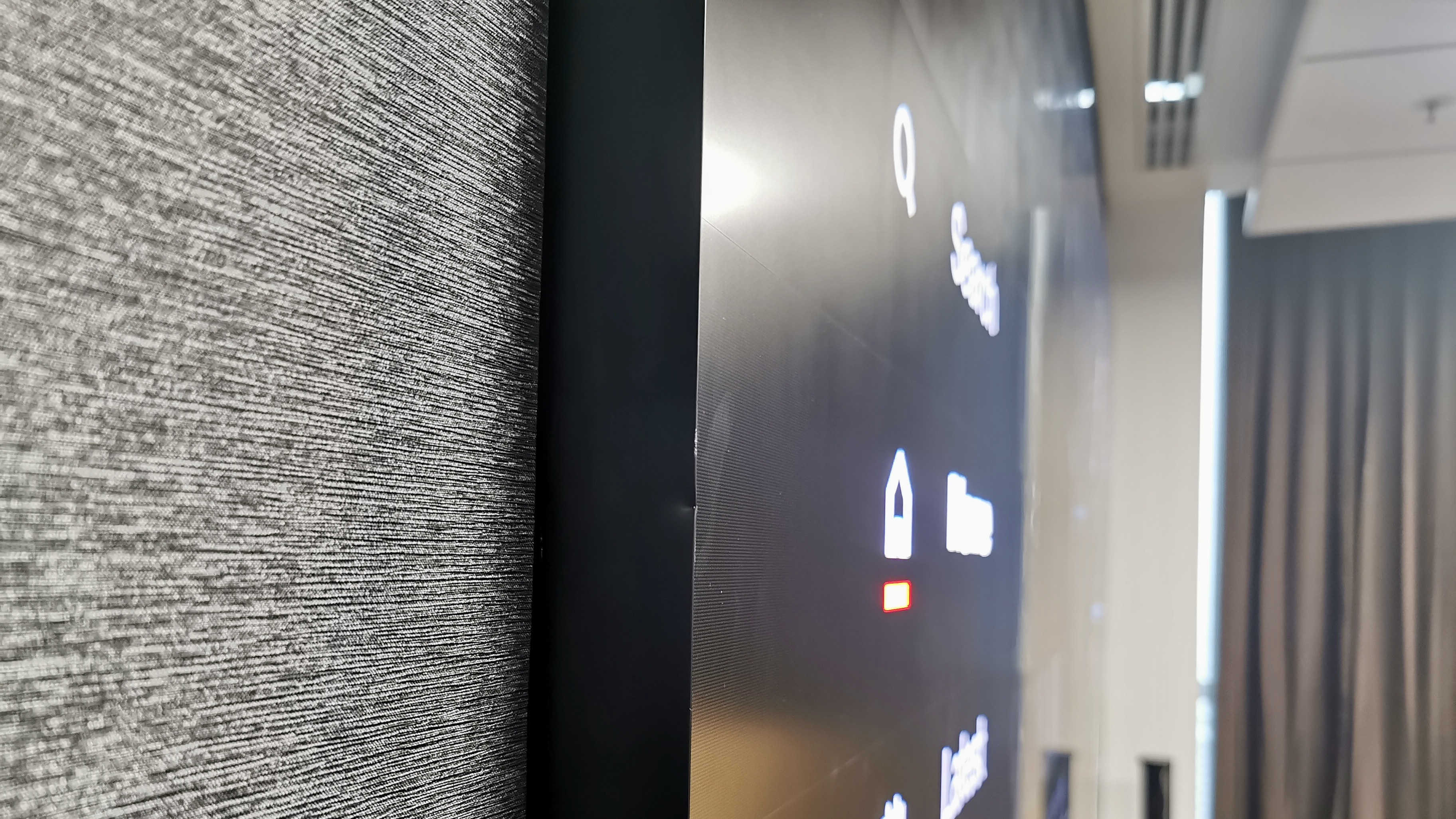 MicroLED is the proprietory panel technology developed by Samsung that uses shrunken, self-illuminating LED building blocks to form a bigger panel. It doesn’t require a discrete backlight, and there’s no need for LCD shutters. In turn, this creates a brighter, more contrast-rich television that can turn pixels off individually.

Samsung believes it retains all the good features of the OLED and improves on the shortcomings. According to them, The Wall uses a non-organic substrate, so it should never have the burn-in issue that's a common issue with OLEDs. 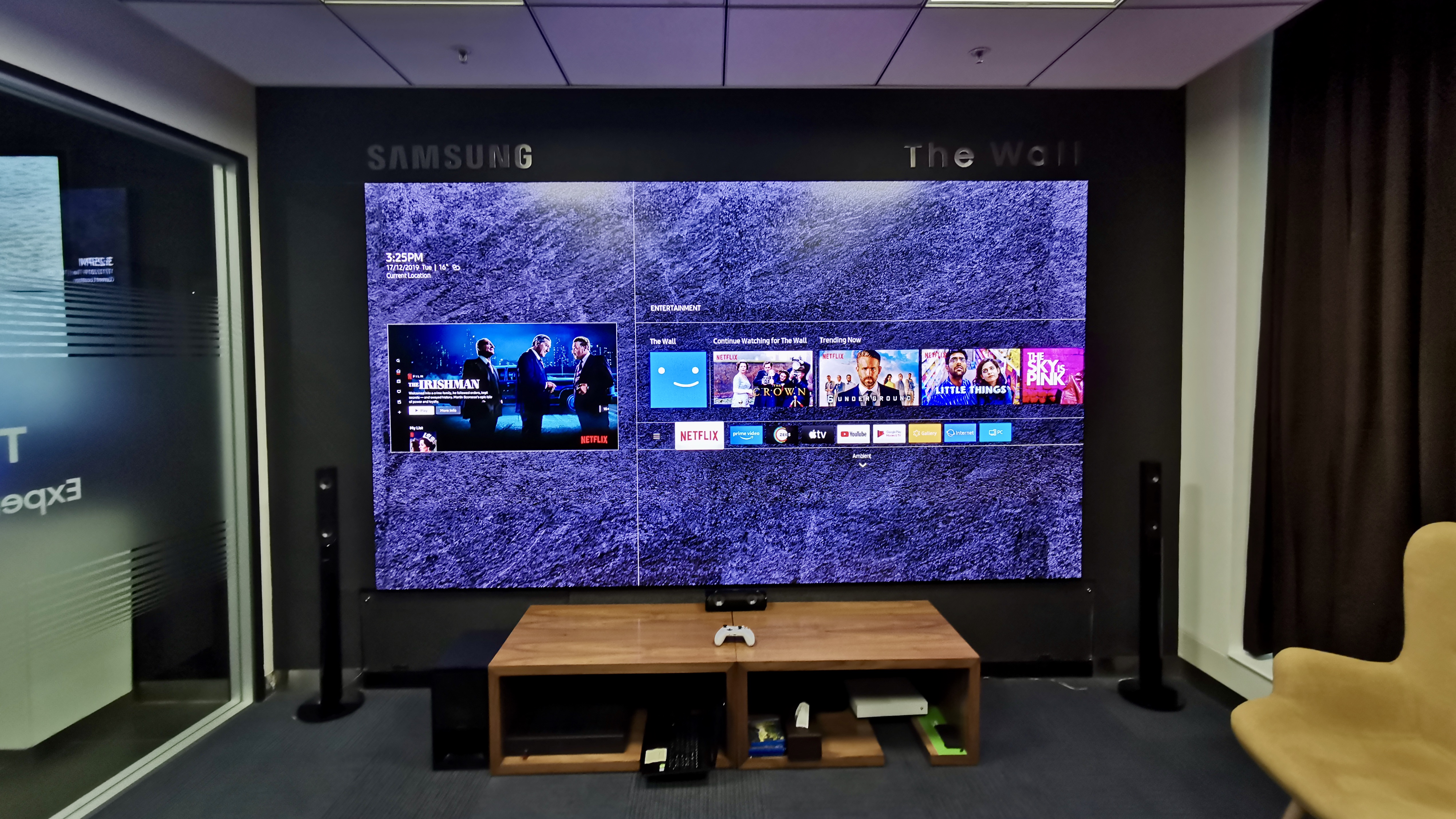 You must have imagined how massive The Wall is, but when you see it in person, it gets even tougher to imagine fitting it in a typical home. The screen goes from edge to edge, meaning there's literally no bezel involved, and it's 30mm thick. The 146-inch configuration that we saw was made of 16 cabinets in a 4x4 setting.

The design choice behind this, we were told, is that when The Wall is set up next to other units, it will look like one seamless image, rather than two TVs working in tandem with bezels interfering with the content on screen.

Samsung highlighted that The Wall is aided by a few smart features like black seal technology, chroma max, quantum HDR technology to enhance the visual experience.

The black seal technology enhances black levels, and it protects the panel from getting tampered by external factors like dust and moisture. Similarly, the quantum dot technology improves SDR content to match HDR quality, prevents color distortion, and optimizes gradation and brightness levels that go up to 2000 nits.

The heart of The Wall is its Quantum Processor Flex that does the upscaling duty to match the huge size of the screen. Samsung claims it uses AI algorithms to analyse the source image and compare images on each pixel to a set of learned patterns and process enhanced information. From what we could understand, the engine does real-time noise reduction, edge restoration, and similar processing to send out data up to 4K resolution at 120fps at its best. 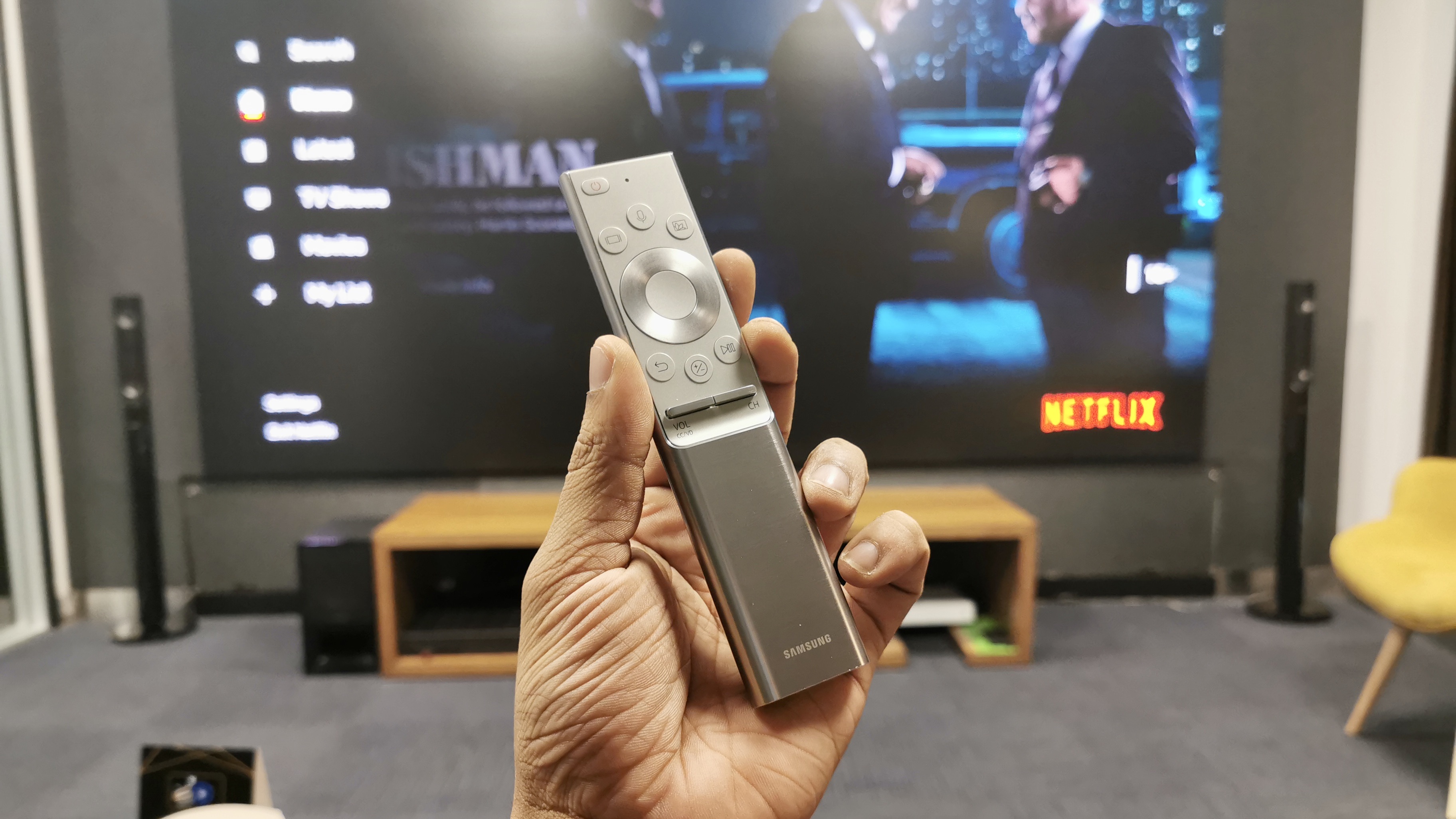 Our demo lasted for merely thirty minutes, but it was enough to get an idea of the picture quality and performance. We spent the majority of the time on the smart TV menu, where The Wall showed its real magic. In our limited experience, we found the picture quality quite similar to a high-end OLED panel.

What's good is that you cannot tell apart the pixels unless you get very close to the panel. To get the best of the picture quality, you should sit at least 8-10 feet away from the panel. I played SDR and HDR content on the screen, and The Wall did show well defined and sharp pictures. The color performance, contrast, and blacks looked nice too. That said, we did not get to test the screen in detail, but it definitely showed promising results in the demo.

The display is so big; you cannot clutter the user interface even if you put 20 useless tiles into it. Samsung has done a commendable job there, as the interface is pretty slick and tidy. Navigating through the interface felt seamless, and there are two display modes- entertainment mode and ambient mode.

Entertainment mode lets you browse content and do everything that you do on your TV, and ambient mode sets it to wallpaper mode. The ambient mode gives you plenty of custom options to use it as a painting, media art, background theme, etc. 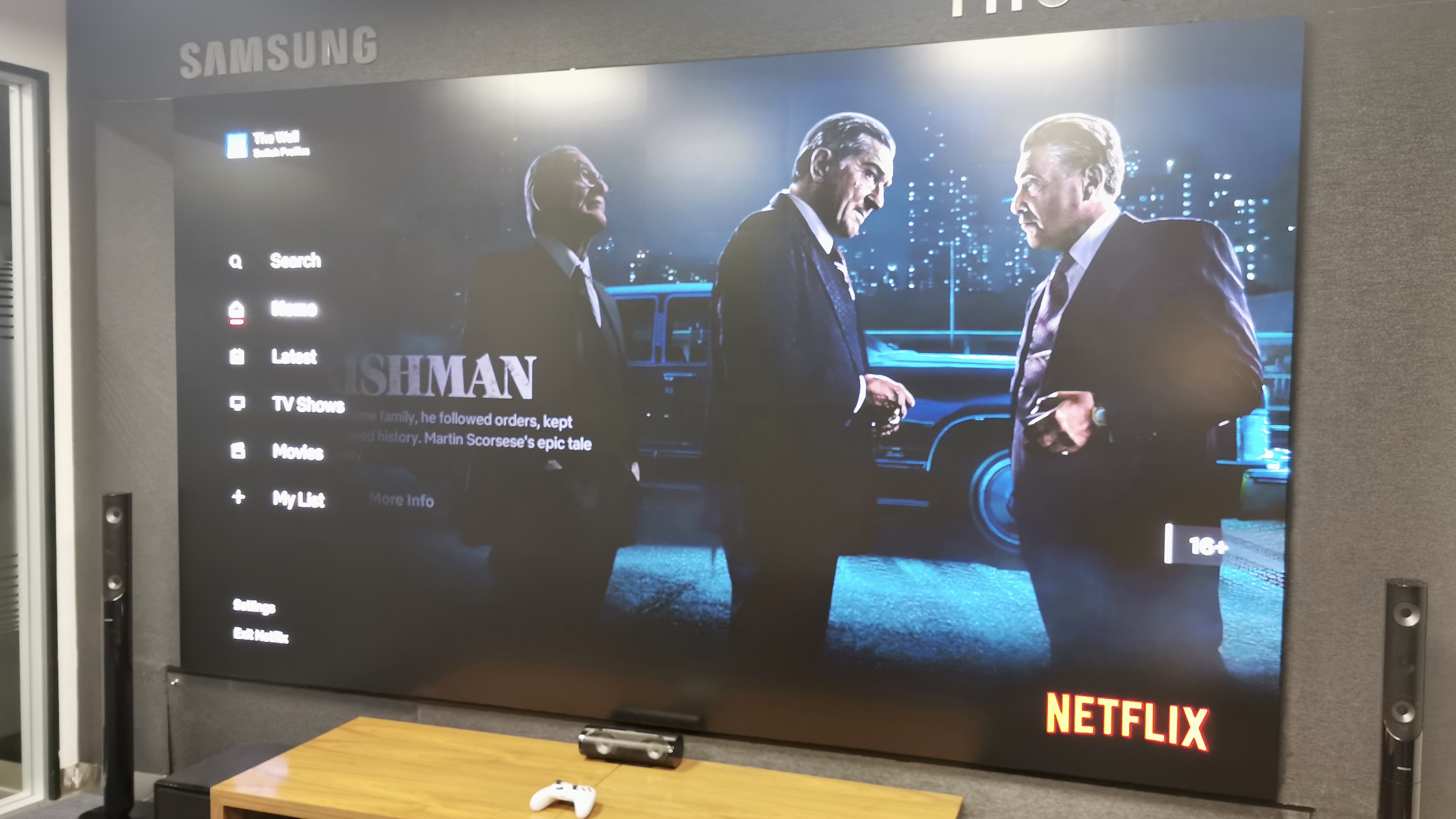 We have seen some other display walls as well, but The Wall takes away most of the limitations that are common with large displays based on conventional technology. It focuses on improving picture quality, lets you extend it, and looks good too.

As mentioned before, The Wall is one of the early adopters of the microLED display tech that will take quite some time to become accessible for the majority. It starts at Rs 3.5 crore without taxes, and that clearly means it's one of the rare pieces of luxury that is not going to be seen everywhere. Apple buys Dark Sky weather app and shuts down the ... 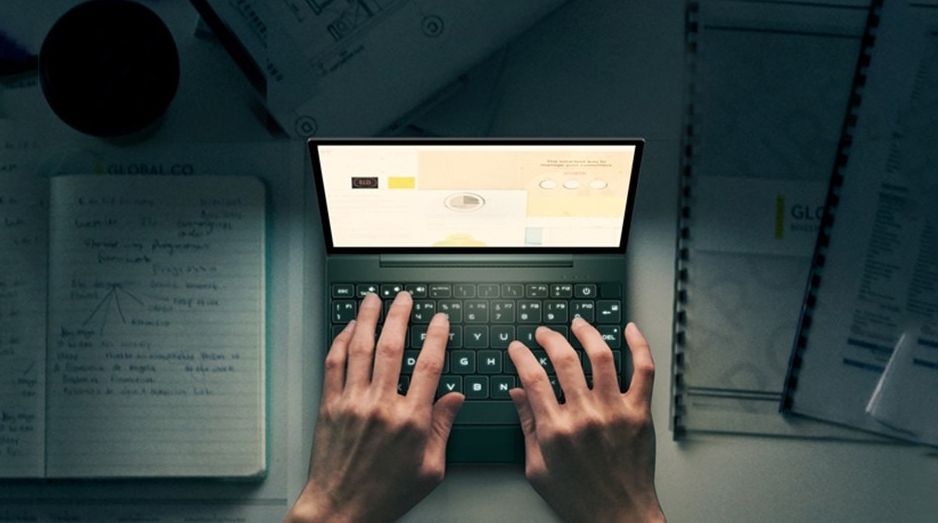 This is the smallest laptop in the world with a to ...
Getting Started with using Bootstrap Barrio in Dru ...
How to create custom twig templates from custom mo ...