The best cheap Amazon Echo prices, deals and sales for Alexa in January 2020

The Alexa voice assistant has become synonymous with voice-controlled smart speakers around the world in just a few short years. If you want to find out why, then take a look at our roundup of the best Amazon Echo prices.

If there are any Amazon Echo sales or deal promos from your favorite retailers we'll find them for you and post the latest information on this page thanks to our price comparison technology.

There are lots of different Echo speakers and screens out in the wild now, with Amazon recently refreshing its lineup with improved versions. The diminutive Amazon Echo Dot deals are a popular choice all year round as it's one of the most affordable smart speakers on the planet. We've got prices for the larger versions too including the Amazon Echo, Echo Studio and more. If you want a visual element too, then we've got you covered with all three sizes of the Amazon Echo Show or the bedside table-friendly Echo Spot, all of which include a screen.

Although Amazon designed and built these smart devices, they're actually on sale at a large number of stores, which means they're never far away from a discount. We'll also list the standard price of each of these Amazon Alexa-powered speakers so you can get a better idea of how good the latest discounts in the comparison charts are. 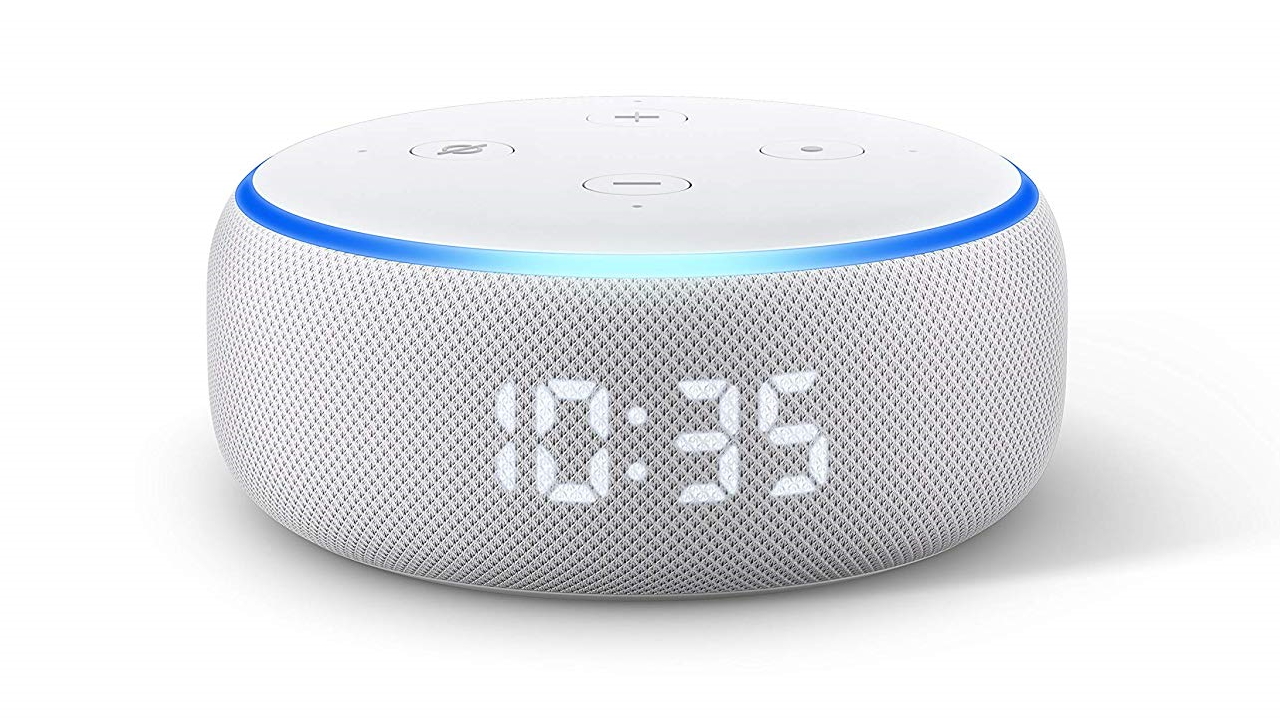 Amazon says one of the most requested questions Alexa gets is for the time, so this will save you a job. Many of us use smart speakers as timers around the kitchen too so we're happy to see the display is used to show the timer counting down. It will also display the temperature when asking about the weather. Other request types will start to take advantage of this extra functionality in the near future.

The only other improvement over the previous model is a 'tap to snooze' option when using the Dot as an alarm. If these new features don't do much for you, then you can save some money by opting for the regular Echo Dot deals below instead. 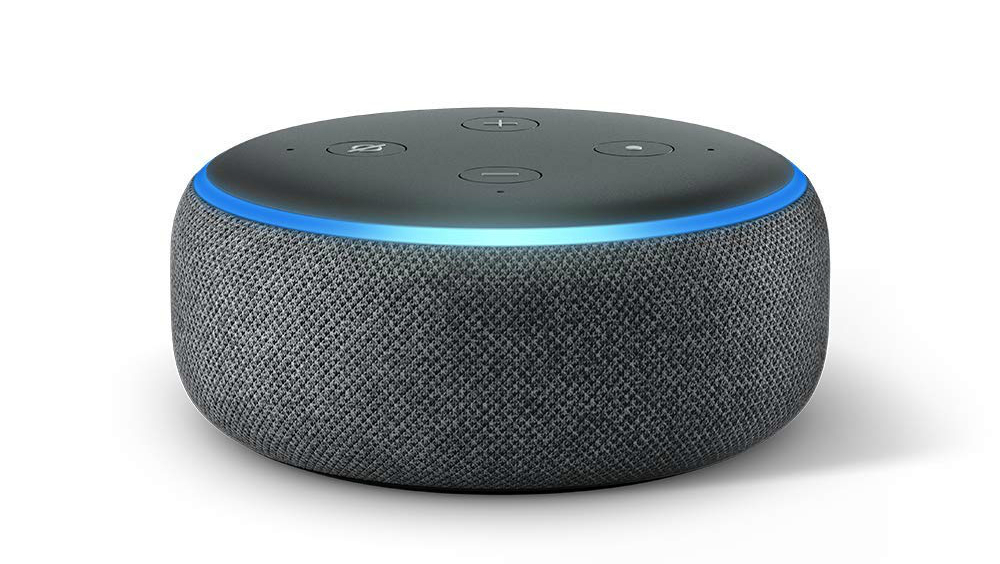 Amazon Echo Dot (3rd gen) launch price: $49.99 / £49.99 / AU$79.
The older, standard 3rd iteration of the Echo Dot comes in three colors - charcoal, heather grey, and sandstone (that'll be black, grey or white to the rest of us). The hockey-puck-shaped speaker has a more refined look with a fabric finish than the older all-plastic speaker. The speaker driver is much larger too, going from a 1.1-inches in diameter to 1.6-inches It's 70% louder than the previous version and keeps the aux 3.5mm connection for a secondary speaker. You can also connect it wirelessly to external speakers via Bluetooth. 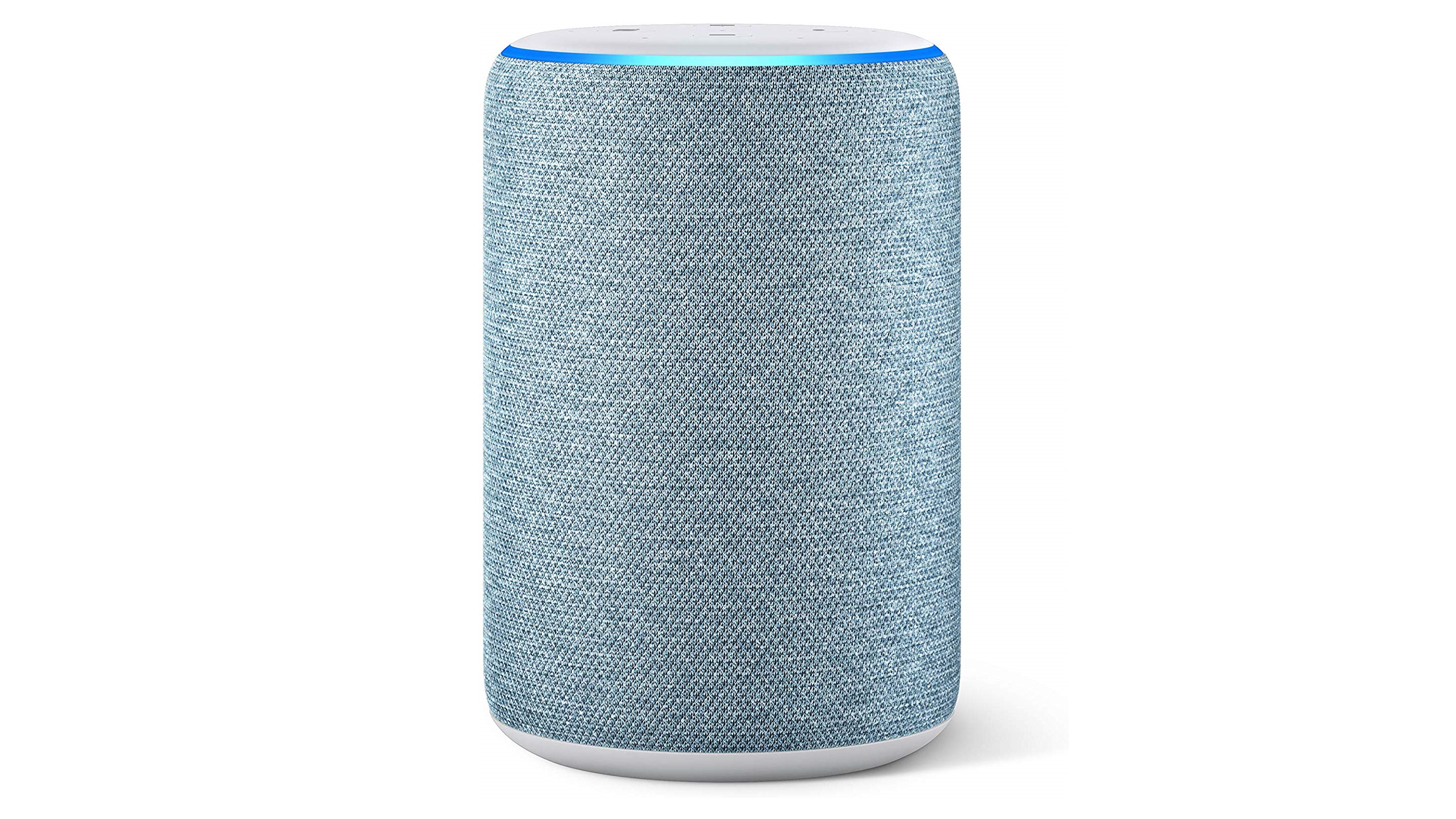 The standard-sized Amazon Echo speaker gets better and better each iteration and this new 3rd-gen model marks the biggest improvement yet, especially for music fans. The audio architecture is now in line with that found in the more expensive Amazon Echo Plus thanks to the neodymium drivers and a larger 3-inch woofer and bigger tweeter too.

It's ever so slightly chunkier than the 2nd-gen model while keeping the same height. The overall aesthetic is the same though really with the fabric design. That being said, Amazon has launched a new color for the occasion in Twilight Blue (see image above).

If you already own a Dot and want to round out the sound with a little extra oomph then this will be a great purchase. Or if you're yet to buy any Alexa speaker, this is a great place to start if playing music will be one of the main reasons you're buying one. 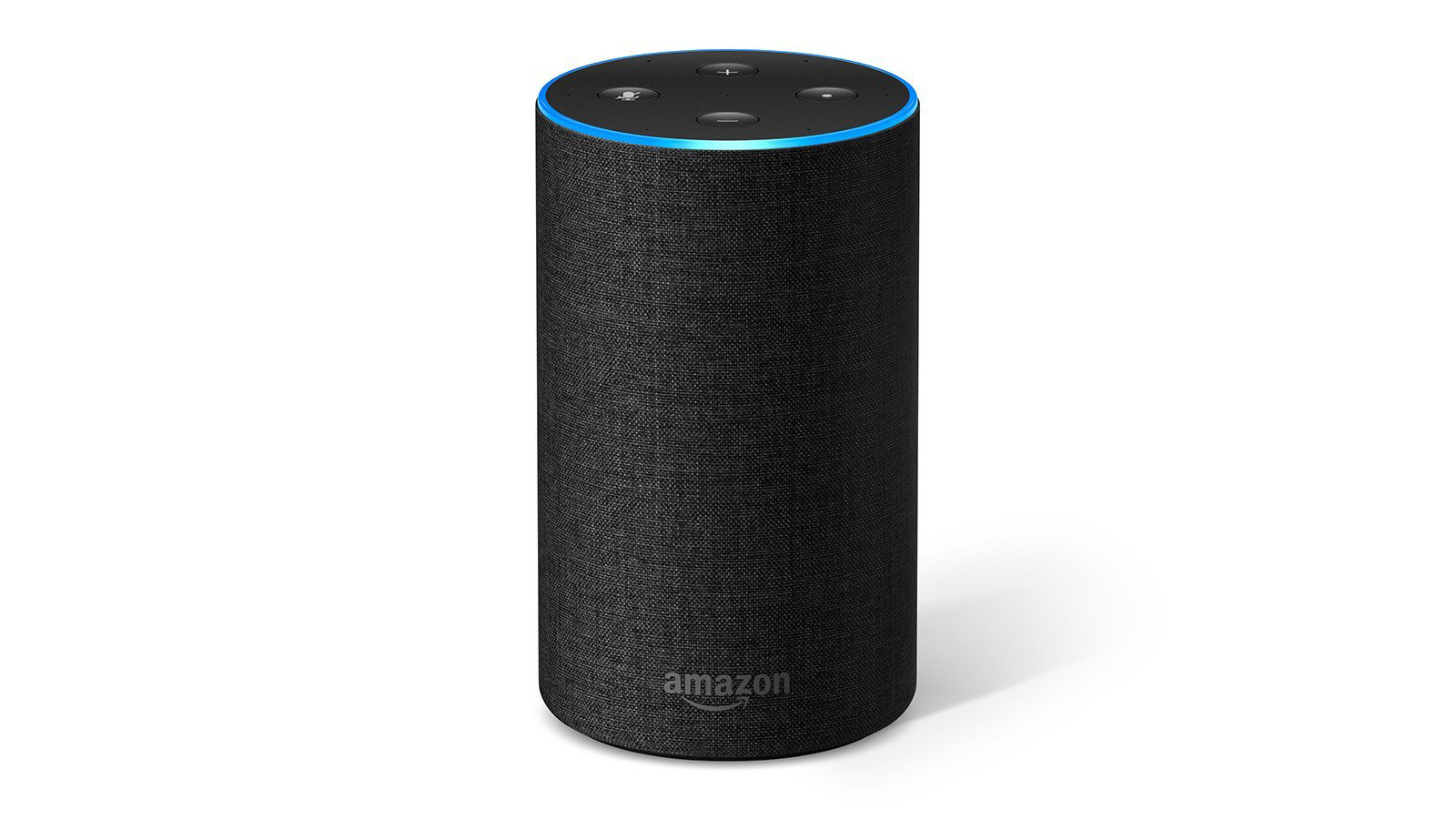 Amazon Echo (2nd gen) launch price: $99.99 / £89.99 / AU$119.
With a newer version hitting shelves, we'd only go for this version of the Amazon Echo if there's a significant discount. And as stores start to clear stock out for the new Echo, we should see great deals some soon.

The 2nd-gen Amazon Echo was the firm middle ground of the Alexa family with a more powerful speaker than the Echo Dot. This second-generation version is a bit shorter but houses an upgraded speaker powered by some neat Dolby processing.

This is the 'just right' option in the Echo lineup. It's not as budget as the Amazon Echo Dot nor is it as premium as the Amazon Echo Plus. It's the one to go for if you're going to use the smart speaker a lot to play music but want to keep prices down. If you just want a smart speaker to boss around and make your home smarter, you might as well save a bit of cash by getting the Echo Dot instead. 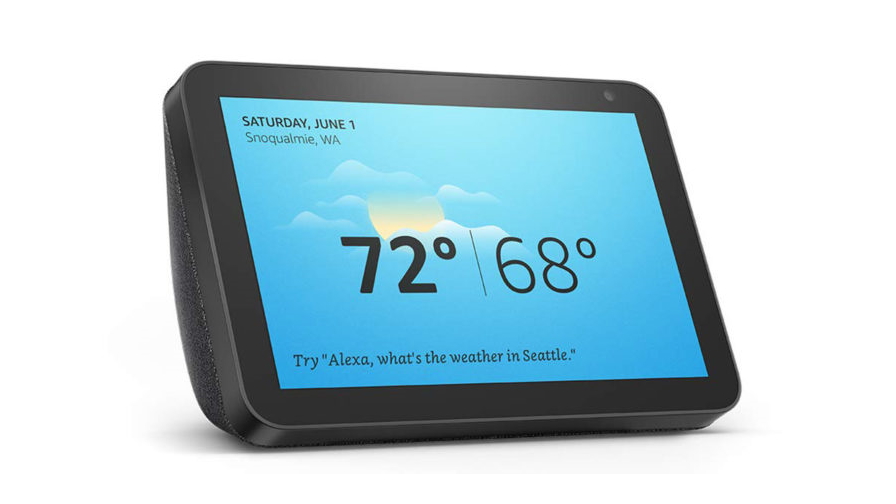 Amazon Echo Show 8 launch price: $129.99/£119.99/AU$TBC.
Not long after the release of the Show 5, Amazon came along with the Amazon Echo Show 8 and a larger screen. So while the Echo Spot and Echo Show 5 are generally better suited to a bedside table, the new Show 8 works better in larger spaces.

If you're looking for some hands-free recipe guidance, along with video tutorials in the kitchen, then this is ideal. There is a larger Echo Show as shown below, but the jump in price for a 10-inch screen is substantial to say the least. So if you're after an Alexa smart speaker with a screen this is the way to go if you want to use it outside of the bedroom. 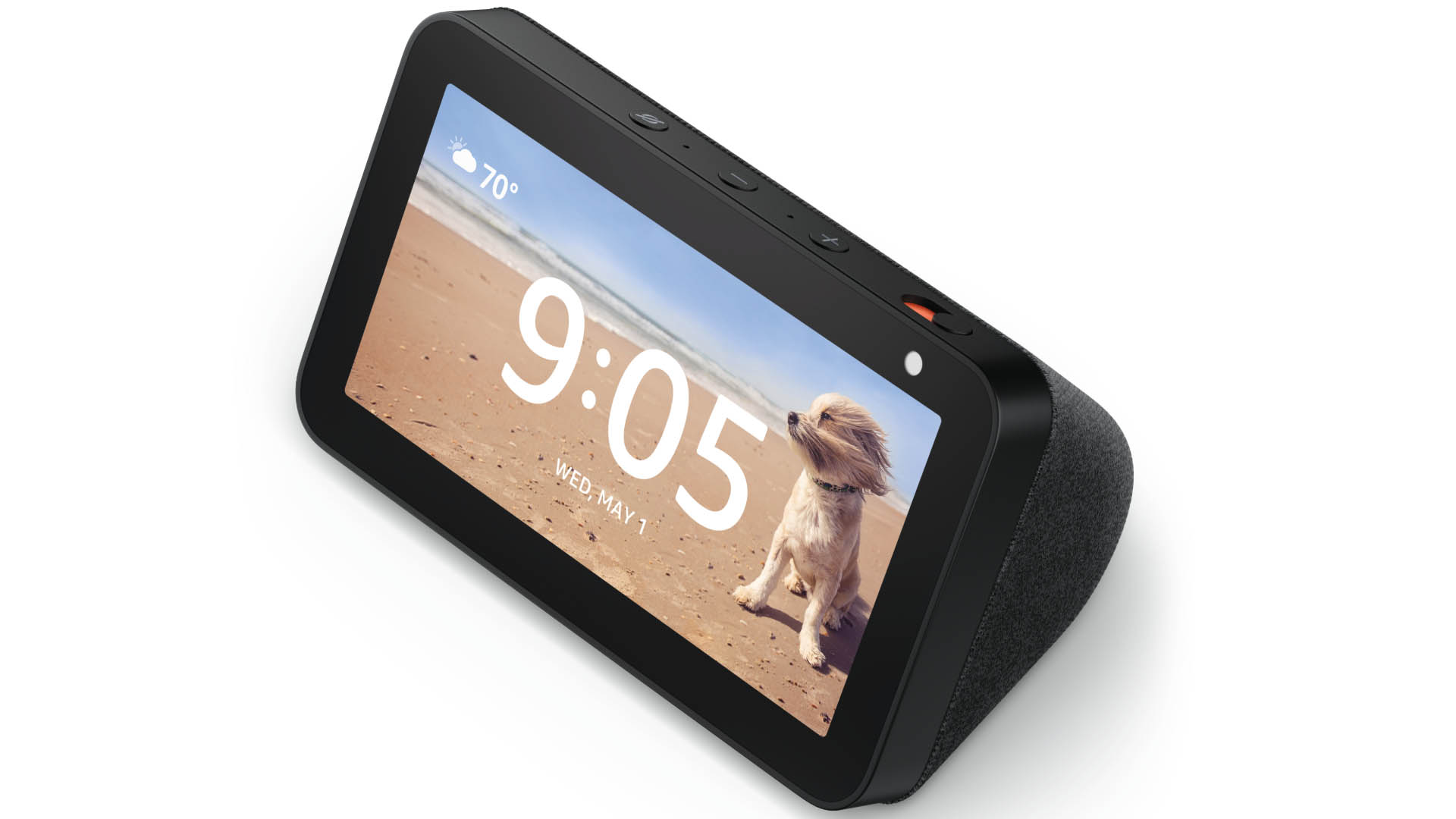 Amazon Echo Show 5 launch price: $89.99 / £79.99 / AU$129.
This is more like it Amazon. This new member of the Echo Show family has a smaller five-inch screen than the original two Show models and it's a lot cheaper too. Actually, it's even cheaper than the Echo Spot which has a comparatively tiny screen. If you can fit this on your bedside table, the louder speaker and bigger screen makes the Show 5 the better buy in our books.

Compared to its bigger brother though or the rival Google Home Hub (aka Google Nest Hub), you might find the screen a little small depending on where you're going to be seeing it from after requesting something via the Alexa voice-commands. The huge selection of how-to videos are super handy though if you can plug it in close by, especially in the kitchen. Check out our full Amazon Echo Show 5 review if you want to learn more about this budget-friendly smart speaker display. 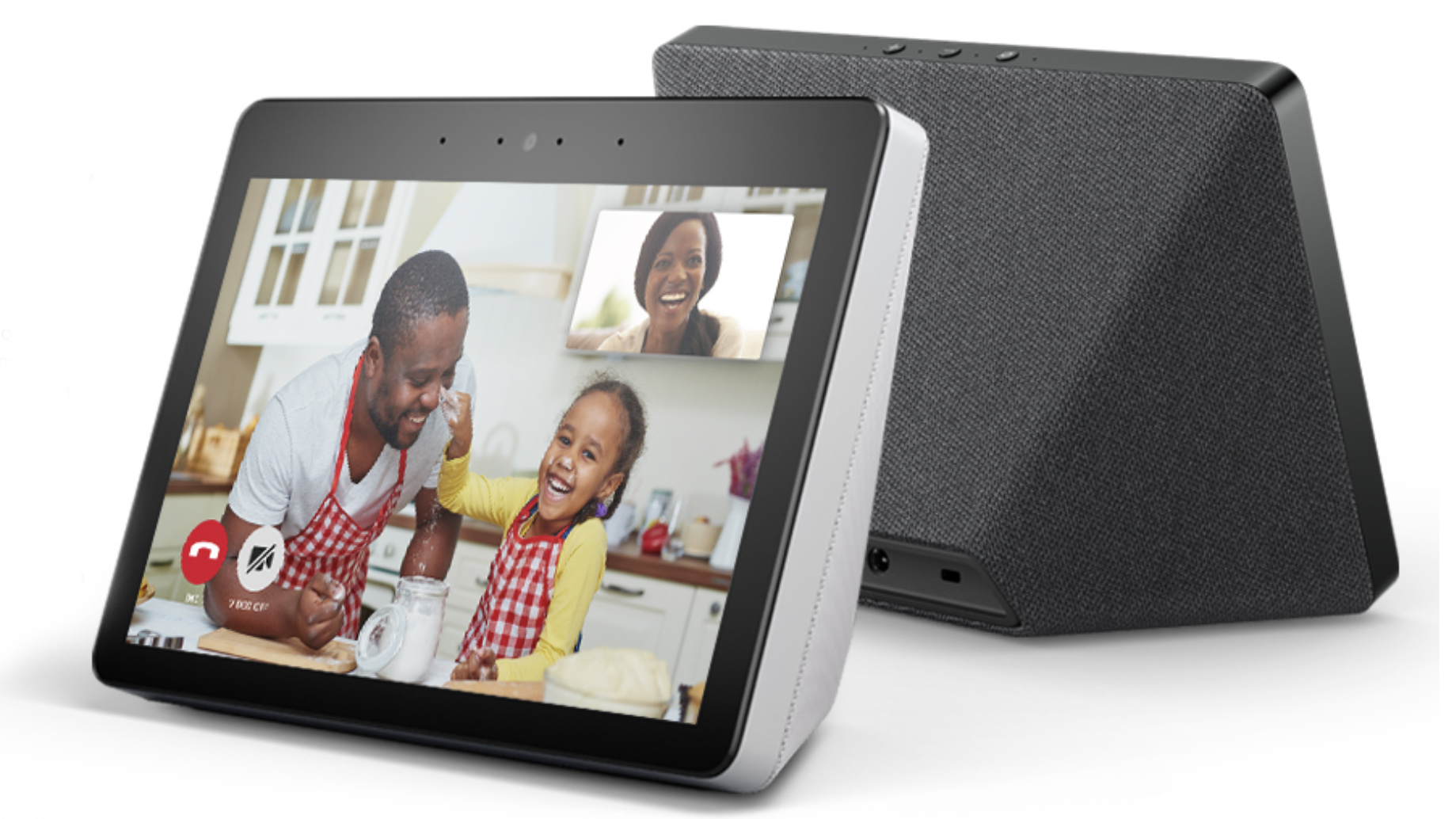 The updated Amazon Echo Show has a bigger screen, with louder speakers too, making it a much better fit for video content to be enjoyed via your Amazon Prime membership or for free on other channels. You can now also use it as a smart device hub for other devices like smart thermostats or bulbs, meaning you can save some space around your router's ports. The competition for screen-sporting smart speakers is heating up though, with the Google Nest Hub also competing for your attention.

That being said, this one could get a major discount in the Amazon Black Friday sales. 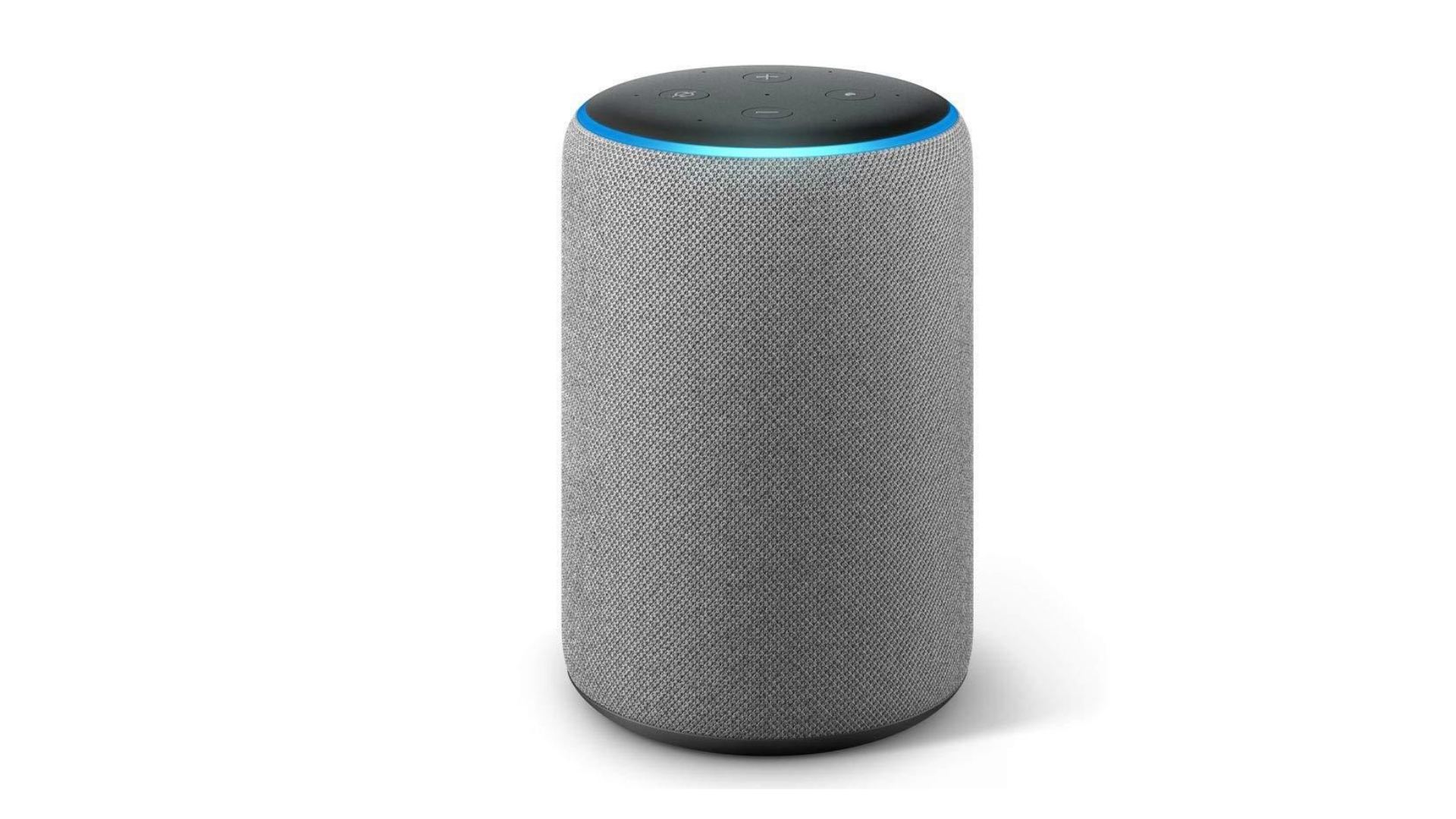 Amazon Echo Plus (2nd gen) launch price: $149.99 / £139.99 / $229.
Amazon revamped the Echo Plus smart speaker in late 2018. It now shares a similar look to the other Echo speakers, with fabric covering the body instead of a harsh plastic, which has improved the speaker's audio output too which we appreciated during video calls. You're getting a bigger sound with the Plus compared to the standard Echo speaker, but not a huge difference in all honest, especially since the newer 2019 Echo upped its game once again.

The main advantage to the Amazon Echo Plus compared to the smaller Echo speakers is the fact that there's a Zigbee smart home hub built in. So if you have Philips Hue bulbs at home, you no longer need the Hue Bridge to work as the brain to control them via apps or Alexa voice-controls. This is great for controlling smart speakers and smart thermostats too - there's even a built-in thermometer for measuring room temperatures. The list of smart devices around our homes is growing constantly and the Echo Plus is ready for the future. If you've started to build up an annoying cluster of cables going into your router to support your smart home devices, this could help clear them right up. Amazon Echo Spot launch price: $129 / £119.99 / AU$179.
The Amazon Echo Spot is a miniature version of the Amazon Echo Show better suited to a desk or bedside table. The small screen is designed to show you little pieces of information rather than watch episodes of The Grand Tour or Mr Robot. But that might be more than enough if you just want to quickly check directions or read a news bulletin. It's very handy for video calls between other Amazon Echo screen devices too. Check out today's best Echo Spot prices below.

Amazon has muddied the waters though with the more recent release of the Amazon Echo Show, a smaller version of the tablet-esque standing screen models of their popular smart speakers. It's bigger than the Echo Spot and quite a lot cheaper too. We're expecting this model's price to drop sharply soon or for it to be discontinued. 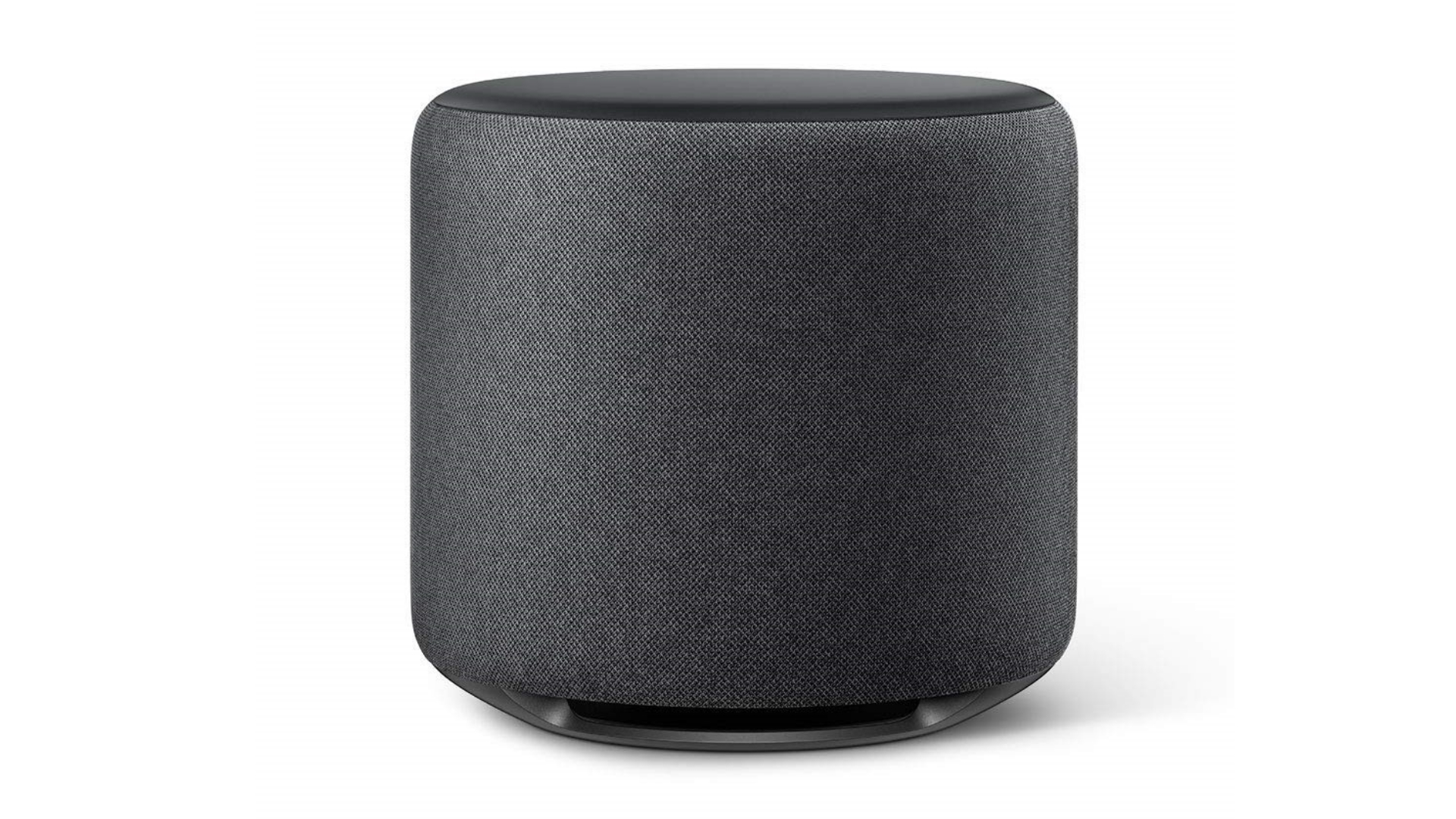 Amazon Echo Sub launch price: $129.99 / £119.99  / AU$199.
If you're going all in on the Amazon Alexa audio setup at home, then you'll want to take a look at the latest Amazon Echo Sub prices. The Echo Sub is not a smart speaker though, it's a subwoofer to connect to your other Echo speakers, so you'll need to pick up one of those (you're already on the right page for them!) if you don't have any yet. Or, check out some of the bundles available as Amazon has started selling the Echo Sub with a pair of regular Echo speakers in some regions to give you a full stereo sound setup at home. If you'd prefer to just have one beast of a smart speaker with a huge sound, then you may want to check out the latest Google Home Max prices instead - be warned, it's not cheap. Loonshots and phase transitions are the key ... Nvidia Pascal is being resurrected to beat Intel I ...

Why did Apple buy NextVR? ...
What, Why and how to use Amazon Virtual Private Cl ...