What is Baby Yoda?

Star Wars fans were thrilled about The Mandalorian the second it was announced as the flagship show of Disney Plus, but few could've predicted that Baby Yoda would steal the show. The first live-action TV series to come out of the Star Wars universe features a guy who dresses a lot like Boba Fett with his own interesting background story, but The Child, as he's known, is arguably the real star.

Since making his debut in The Mandalorian in November, Baby Yoda has been a sensation. A cuter, younger version of the ancient Jedi master, he’s one of the most endearing creatures ever seen in the Star Wars universe, and has since become the talk of the internet – a walking merchandising opportunity, and the source of wholesome memes.

But what is Baby Yoda? How does he fit into the Star Wars universe? And what will we learn about him in The Mandalorian season 2? We unleash the Bothan spies to find out. 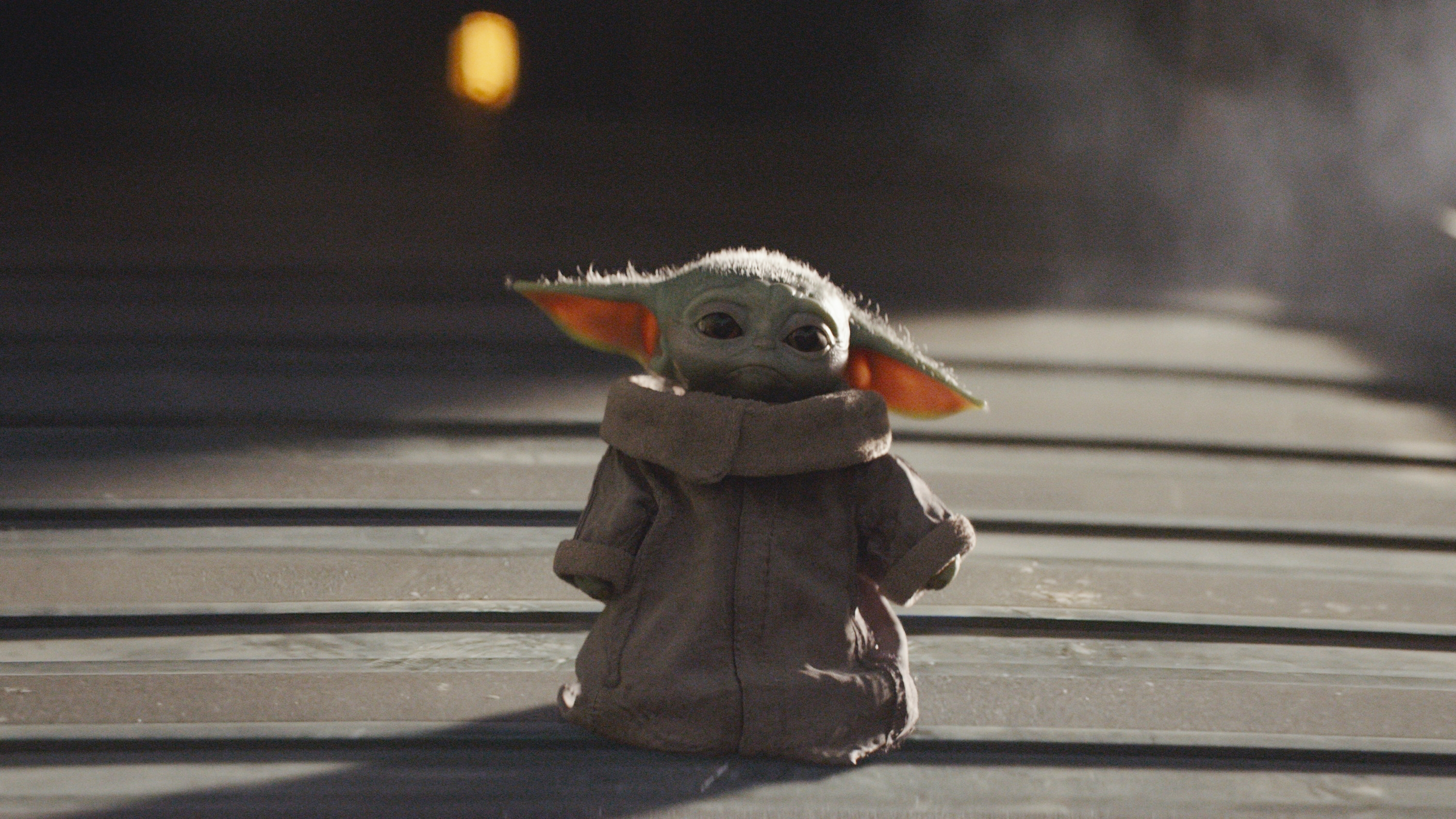 What do we know about Baby Yoda?

The creature who’s become known as Baby Yoda is the surprise break-out star of The Mandalorian. Wisely kept hidden from all the pre-release marketing for the most anticipated show on the newly launched Disney Plus, he made his debut at the end of the show’s first episode. This was where we discovered that the lucrative target the eponymous Mandalorian bounty hunter was pursuing was actually a green alien infant with large ears – who looked a lot like a certain diminutive Jedi Master…

He’s clearly of massive importance to the mythology of The Mandalorian – and Star Wars as a whole. The mysterious Client (played by legendary movie director/actor Werner Herzog) hired numerous bounty hunters (including assassin droid IG-11) to bring back “The Child” – as he’s officially designated in the show – with the successful hunter being handsomely rewarded.

The Client – who, going on his choice of Stormtrooper bodyguards and Imperial insignia around his neck – is working for the remnants of the Empire (eventually, it turns out, on behalf of Moff Gideon, introduced in The Mandalorian episode 7), and clearly wanted something from The Child. “I order you to extract the necessary material and be done with it,” he tells underling scientist Dr Pershing, but we have no idea what that material might be.

We’d be very surprised, however, if it didn’t have something to do with the Force – and rebuilding the Empire into what will become the First Order in Episodes 7, 8 and 9. Maybe they’re planning on removing the Midi-chlorians (Force-carrying particles) from his blood – that would explain why they were so keen on capturing Baby Yoda alive.

What are Baby Yoda's Force powers?

We've seen that Baby Yoda can use Force choke like Darth Vader, he can heal beings with the Force, he can lift objects, and he uses his power to control the course of fire in Chapter 8 of The Mandalorian. No doubt we'll see more Force powers in action as the show goes on.

Is Baby Yoda a clone?

The Baby Yoda clone theory suggests that Dr Pershing is actually a cloning scientist, based on the symbols on his uniform. That hints that the little alien was created on Kamino at the same facility where the Clone troopers were made, and that there's a strong connection between Baby Yoda's origins and that part of the Star Wars universe.

Cloning is a big part of the Star Wars universe – indeed, clones fought an entire war – so the theory went that Baby Yoda could be a young copy of the original model. However, in Chapter 7 of the show, Kuiil (Nick Nolte) comments that the character doesn't look like he's been engineered, based on his experience on gene farms. So many mysteries still remain around Baby Yoda. Kuiil even dares to call him too ugly! Outrageous.

This being Star Wars, however, there are plenty of other theories flying around the internet. One suggests he’s the child of Yoda and Yaddle, and in terms of timelines, that’s not preposterous. If Baby Yoda is 50 years old, he’d have been born about 10 years before the events of The Phantom Menace, and presumably both Yoda and Yaddle would have been on the Jedi Council at that point. It’s also unlikely, however, because Jedi have strict rules preventing romantic relationships – and Yoda’s never given us any indication he’d be the kind of guy to break them.

Some say he could be a reincarnation of the Jedi master. That would be new territory for Star Wars, but the post-Disney buyout Star Wars universe has frequently played around with the rules of the Force, so it’s not impossible. That said, the fact that Yoda died only five years earlier makes it too late for him to have been reborn as a kid who’s now 50, so this is probably one to file in the “pinch of salt” column.

Intriguingly, the date of Baby Yoda’s birth is very close to Anakin Skywalker’s – within a year, in fact. The Phantom Menace hints very strongly that the future Darth Vader had no father and was conceived by the Midi-chlorians. Perhaps the similarly Force-sensitive Baby Yoda came into existence at the same time in the same way, as part of the Midi-chlorians’ efforts to bring balance to the force.

Finally comes the option that he’s simply some random member of Yoda’s species, with no connection to him beyond that. But hey, this is Star Wars where everyone’s destiny is interlinked, so does anyone really believe that?

What will we learn about Baby Yoda in The Mandalorian season 2? 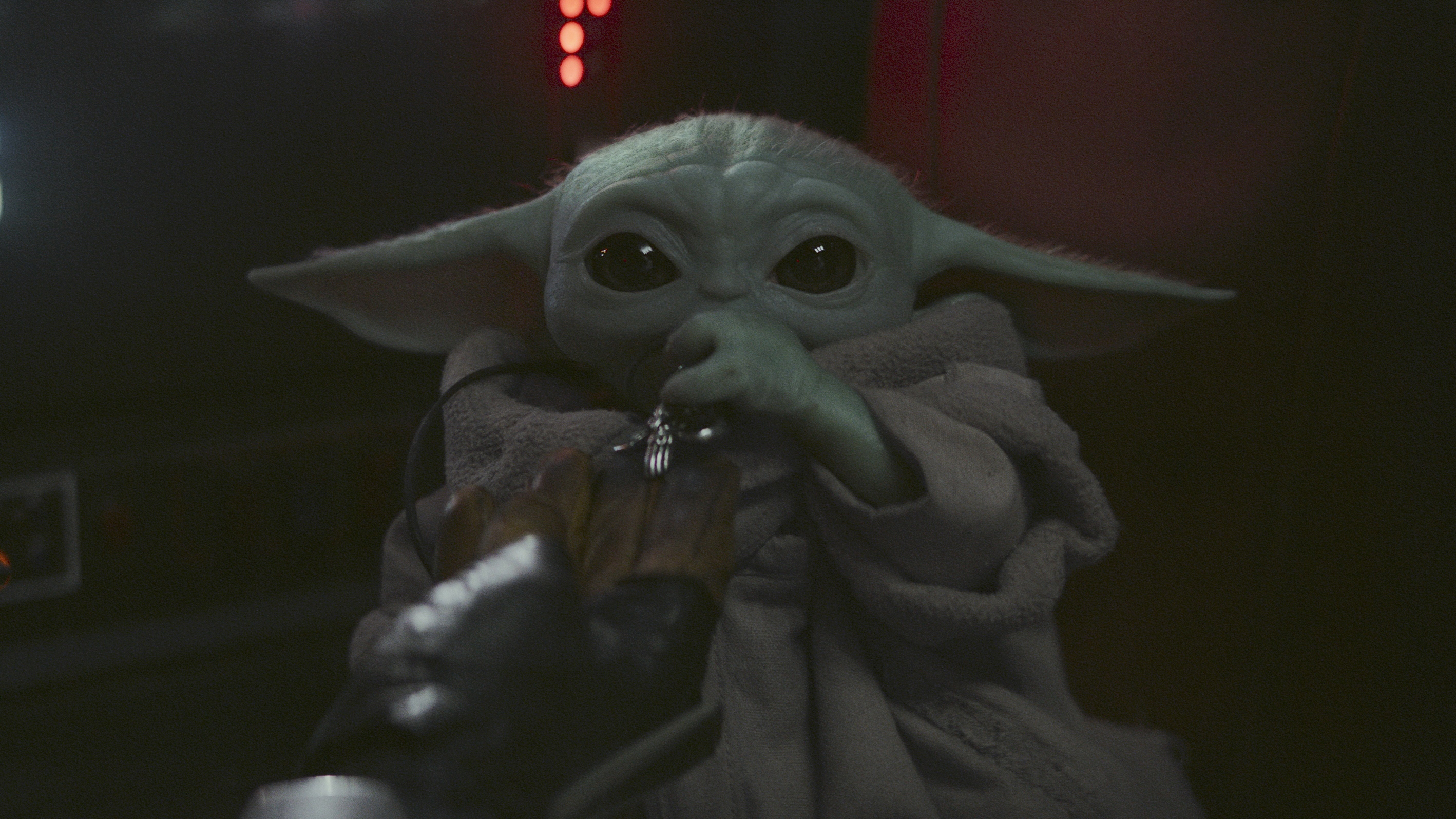 The end of The Mandalorian season 2 suggests that its titular protagonist will be searching for Baby Yoda's homeworld. This is an enduring mystery in the Star Wars universe, and it's an exciting prospect for expanding the character's story in the second season.

Is Baby Yoda in The Rise of Skywalker?

Sorry, but Baby Yoda does not appear in Star Wars: The Rise of Skywalker. He remains The Mandalorian's special little guy. It's probably for the best.

What is the name of Yoda's species? 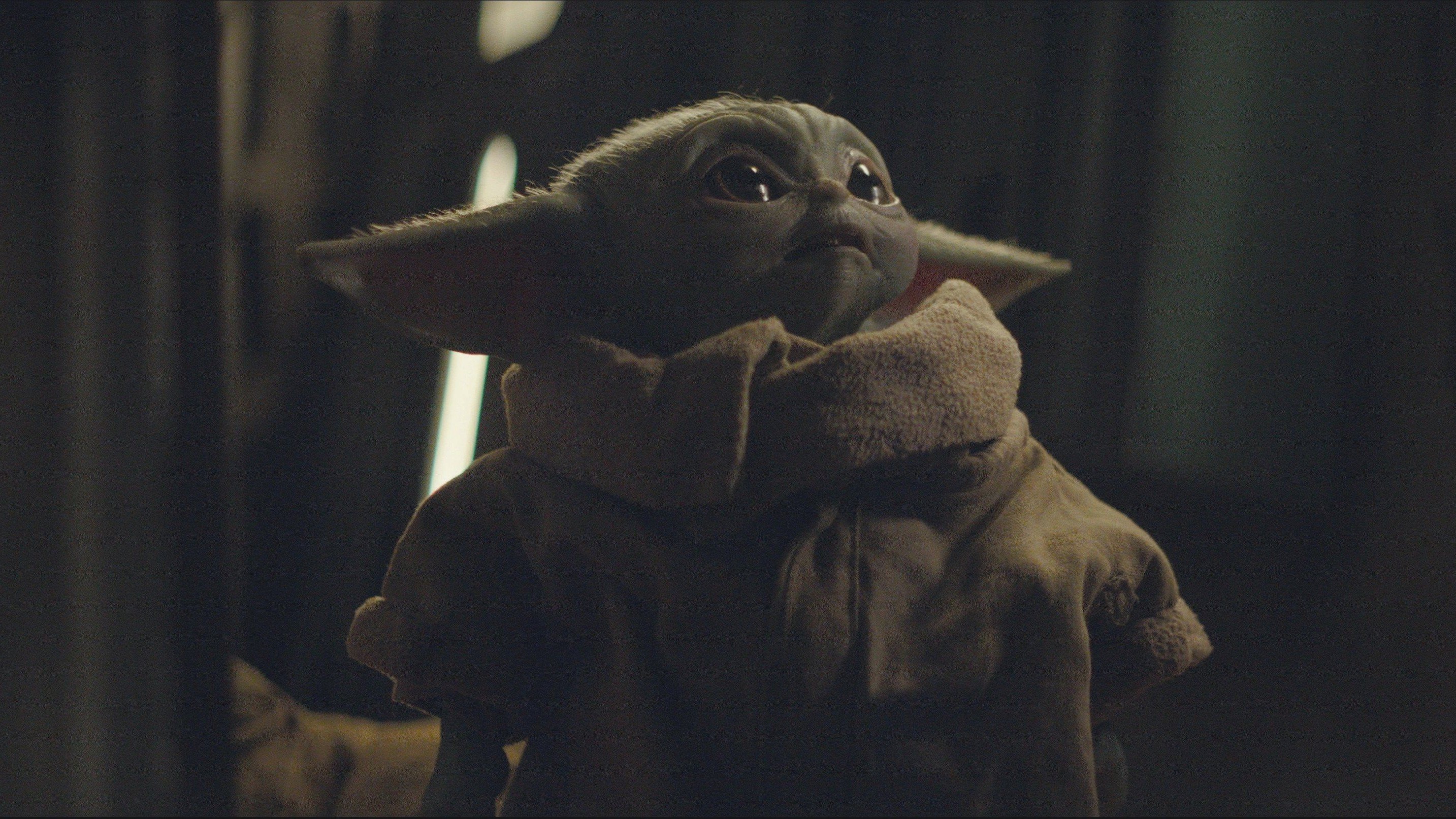 Nobody knows – which is odd in itself.

The Star Wars franchise has a long history of creating names for almost every character, species or planet that’s ever appeared in a movie, TV show or book – even if they’ve had mere seconds of screentime. For example, the Death Star trash compactor monster in Star Wars: A New Hope was subsequently designated a dianoga, while the space slug that tries to eat the Millennium Falcon in The Empire Strikes Back is an exogorth.

Yoda is a special case, however. Before George Lucas sold Lucasfilm to Disney, the Star Wars creator had a strict rule that specific information about Yoda and his past was out of bounds for writers. That means we have no idea where he originated or what species he belongs to. The closest Lucas came to giving anything away was describing Yoda as “the illegitimate child of Kermit the Frog and Miss Piggy”, though we suspect that’s not official Star Wars canon…

It’ll be interesting to see if, now Disney is in charge, they continue to follow Lucas’s directive to keep all things Yoda classified, or use Baby Yoda as an excuse tell us more about Yoda Sr’s mysterious past.

We do know, however, that Yoda’s species is naturally strong with the Force – and not just because Yoda himself had an incredibly successful career as a Jedi master. Even as an infant, Baby Yoda has the power to levitate a giant (and angry) Mudhorn, while the only other member of the species to feature on screen, as mentioned earlier, was Yaddle, a female member of the Jedi Council. She briefly appears in The Phantom Menace.

Why is Baby Yoda such a big deal?

Basically, the internet loves him – forget Porgs, this kid is arguably the cutest thing ever to come out of that galaxy far, far away. As soon as he made his debut in The Mandalorian’s first chapter, Baby Yoda became a meme generator of awe-inspiring power, and the most talked about thing in the show. Everything he does is guaranteed to make you go “Aww”, whether he’s sleeping, drinking soup, or even eating a frog creature alive – Baby Yoda can get away with pretty much anything. 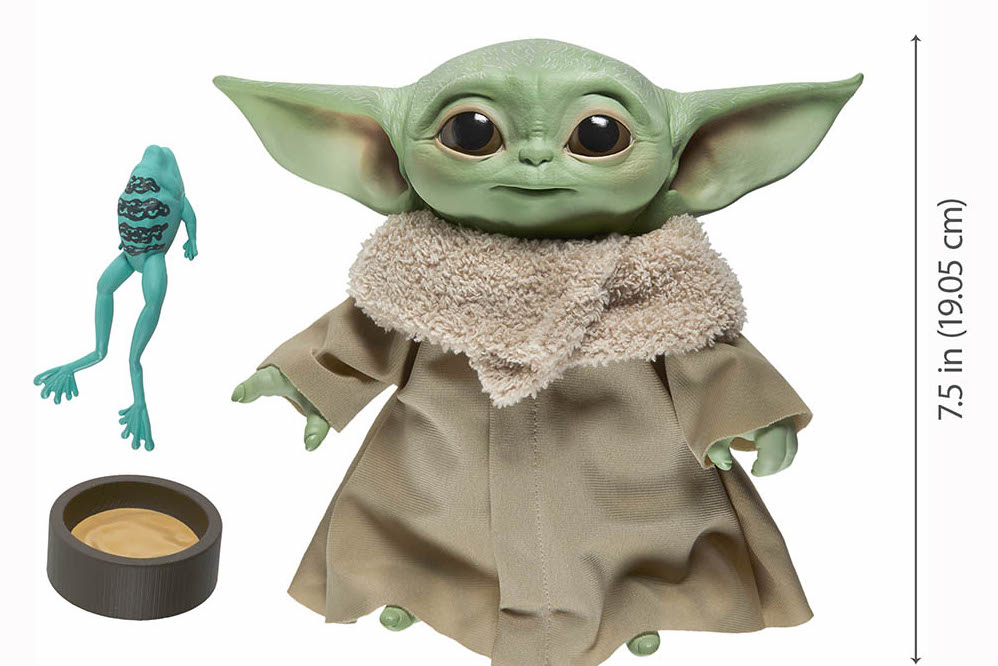 It’s unlikely the merchandising bosses at Disney were complaining when the production team introduced Baby Yoda to the The Mandalorian’s story. Indeed, characters as cute as him are a dream come true for anyone who wants to sell lots of toys and clothing – unsurprisingly, there’s already some merch available (including the inevitable Funko Pop! Vinyl figure), with more to follow in 2020.

Here's a short list of the highlights, if you need any of them in your life:

Still, while you might find Baby Yoda a bit cynical, the fact that showrunner Jon Favreau and Chapter One director Dave Filoni were able to hold the character reveal until the show aired – keeping Baby Yoda’s existence a secret until The Mandalorian made its debut – suggests that in this case, keeping the storytelling sacred was the priority. After all, keeping Baby Yoda a secret arguably denied The Mandalorian and Disney Plus the biggest pre-launch marketing opportunity their hot new show was ever going to get.

Baby Yoda memes: there are so many

Cementing his status as 2019's icon, Baby Yoda memes are all over the internet right now. Instead of listing them all here, we've embedded one of the highlights above, and clicking on this link will unleash more than one person can ever reasonably happen. Good luck. All eyes are on the next liquidity event when it c ... AngularJS ...
How to create custom twig templates from custom mo ...
Why Get Free API as your APIM, and What isthe AP ...